This ice cream flavour might sound a bit weird, but there’s an explanation for it. A few weeks ago, Ben & Jerry’s released a flavour like this called “Netflix and Chill’d”. This is not exactly like that one and I can say that because I’ve never had it, lol. So I would definitely not say this is a copycat version. I have to say I’m in love with this peanut butter ice cream with brownies and pretzels. Not only because it’s no-churn but also THE FLAVOUR IS INSANE!

You can make only the peanut butter ice cream without the brownies of pretzels without any problem :). It’s delicious ice cream and it works like a dream! If you want, you can add chopped chocolate pieces as I did with my stracciatella ice cream or maybe manjar blanco or even blondies if you prefer them to brownies. For this ice cream, I bought the peanut butter because my food processor has been acting weird lately. You can make it yourself at home but make sure that your food processor can make it REALLY SOFT. If that’s not the case, it’s best to buy it like I did. To make peanut butter you first toast the peanut in the oven and place on full speed in your food processor while still warm. As the minutes go by you will see it go from peanut dust to butter.

For the brownies to be this mini I made half a recipe for my fudgy gooey brownies which are made with cocoa powder. You could also use half my dark chocolate brownies recipe instead. It’s important that you don’t cook them for too long so that they’re fudgy in the ice cream and feel nice when frozen. If you leave them in the oven for too long, since the batter is spread so thin, it will turn into a cookie.

If you love ice cream you definitely need to make this recipe. However, if this recipe isn’t your style though, you’re welcome to check out my ice cream recipe section here on the blog. I love love love the flavour that the pretzels add to this recipe. They have that coarse sea salt action on top that goes amazing with the peanut butter and chocolate. If you can’t get or don’t like pretzels, you can also use salted peanuts and be careful not to mix them in too much so that the salt doesn’t dilute into the ice cream. 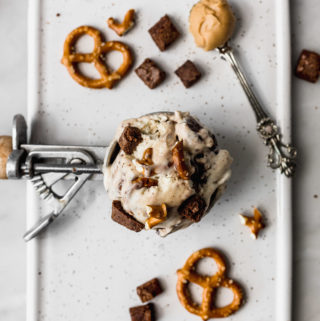 For the mini fudgy brownies