I’m in love with apples and it’s only logical that if you like apples you also like cinnamon. They’re one of those celestial couples, like Romeo and Juliet minus the suicide. If you also like the cinnamon and apple combo, you can try making my apple pie and cinnamon apple galette as well! I highly recommended them, they have been one of the most popular recipes to make during these quarantine/social distancing times. On the other hand, you can also check out my Berry Pop Tarts recipe! Oh and by the way, this recipe makes 8 Pop Tarts but you can definitely make half a recipe if you prefer.

These quarantine/social distancing days have been tough, I won’t lie. There are days when you get up and feel optimistic and there are others where it seems like it won’t end anytime soon. It’s not easy to smile sometimes and you might feel like staying in bed all day long. I want you to know that it’s normal, that we all feel the same way and this is not easy for absolutely anyone. The only way in which we’re going to survive this is if we work together like we have been doing. For me, cooking is one of the things that gives me the most joy. It’s like therapy for me, I swear. The other thing that makes me happy is seeing you guys making and enjoying my recipes. So thank you for your photos and for sharing your creations with me!

Right below this paragraph, you’ll see step by step photos of the assembly of the Pop Tarts :). With time, I have perfected my method and I love how they turn out. There’s only 8 of them to make so it’s not thaaaat much of an effort. As a matter of fact, these days it’s relaxing to spend time on things that require our attention. Before eating them you want to place them in a microwave oven for 10-15 seconds. You’ll see they become so much better. They’re even better if you eat them with a cup of hot tea or coffee. 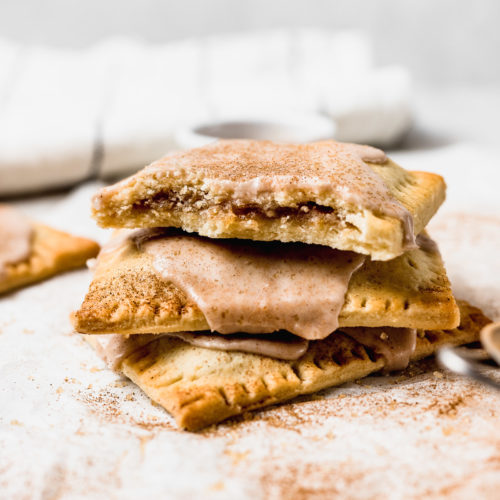 Thanks for sharing this recipe. I’ll have to try making these with my boys. I think they’ll love them. Besides, what kid doesn’t like Pop Tarts? 🙂 And what’s even better is the fact that Mom and Dad will love them too.

Yesss! They will love them for sure and you as well 🙂