Last week I didn’t post because my sister came to visit and I couldn’t help but to spend all my time with her. Our utmost favourite activity was to go to an organic vineyard called Emiliana. It’s incredibly interesting to see how they go around making wine without the use of pesticides or fertilizers in any of their processes.

Casablanca is the name of the valley where this vineyard is located. This valley is specially good for growing white wine varieties such as Chardonnay and Sauvignon Blanc. You can get to the valley by car in roughly 45min from Santiago, the capital of Chile. 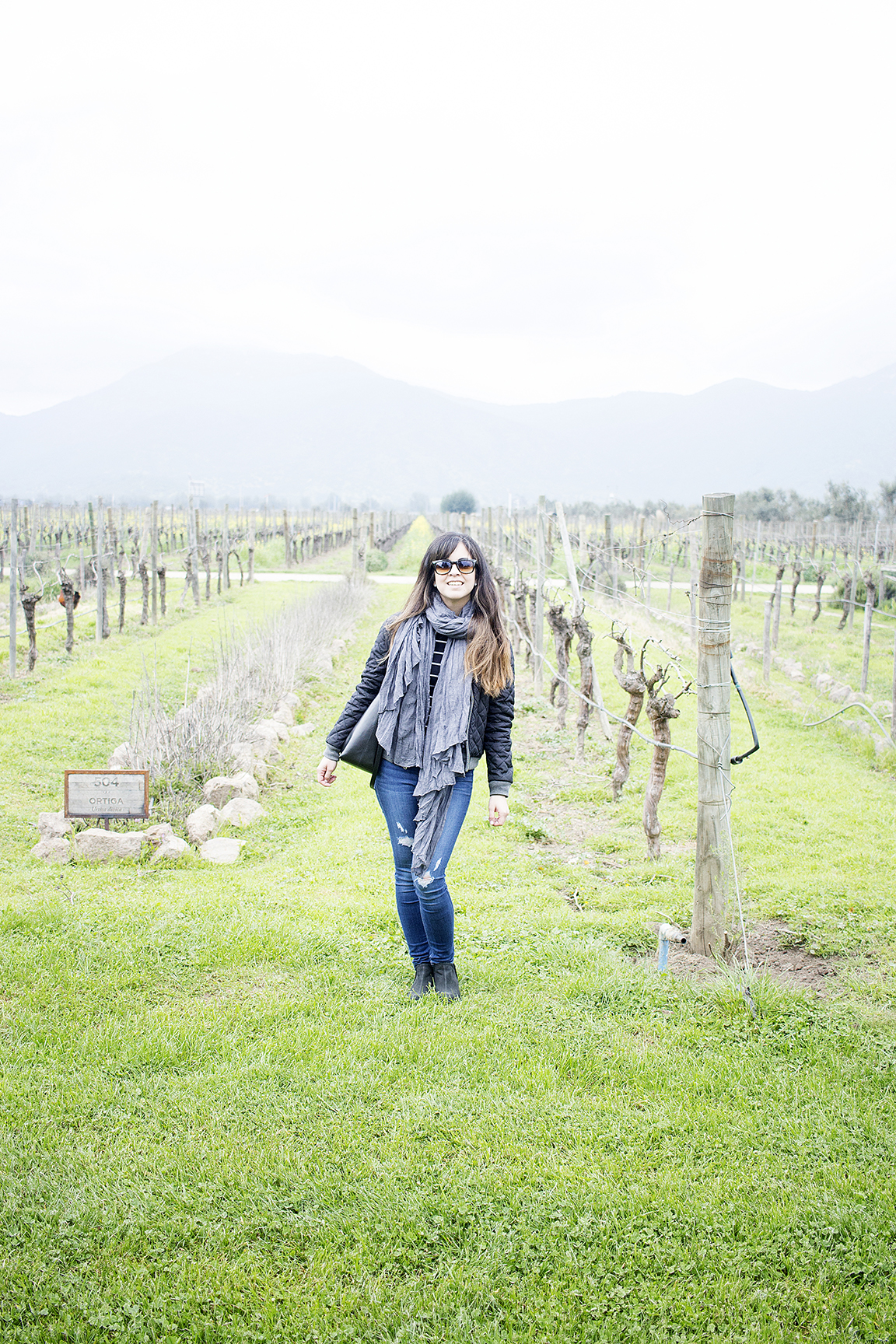 Emiliana also has vineyards in the Colchagua region further South (where red wine grapes grow better). That’s also where the grapes are transported to be stored, processed and aged accodingly. 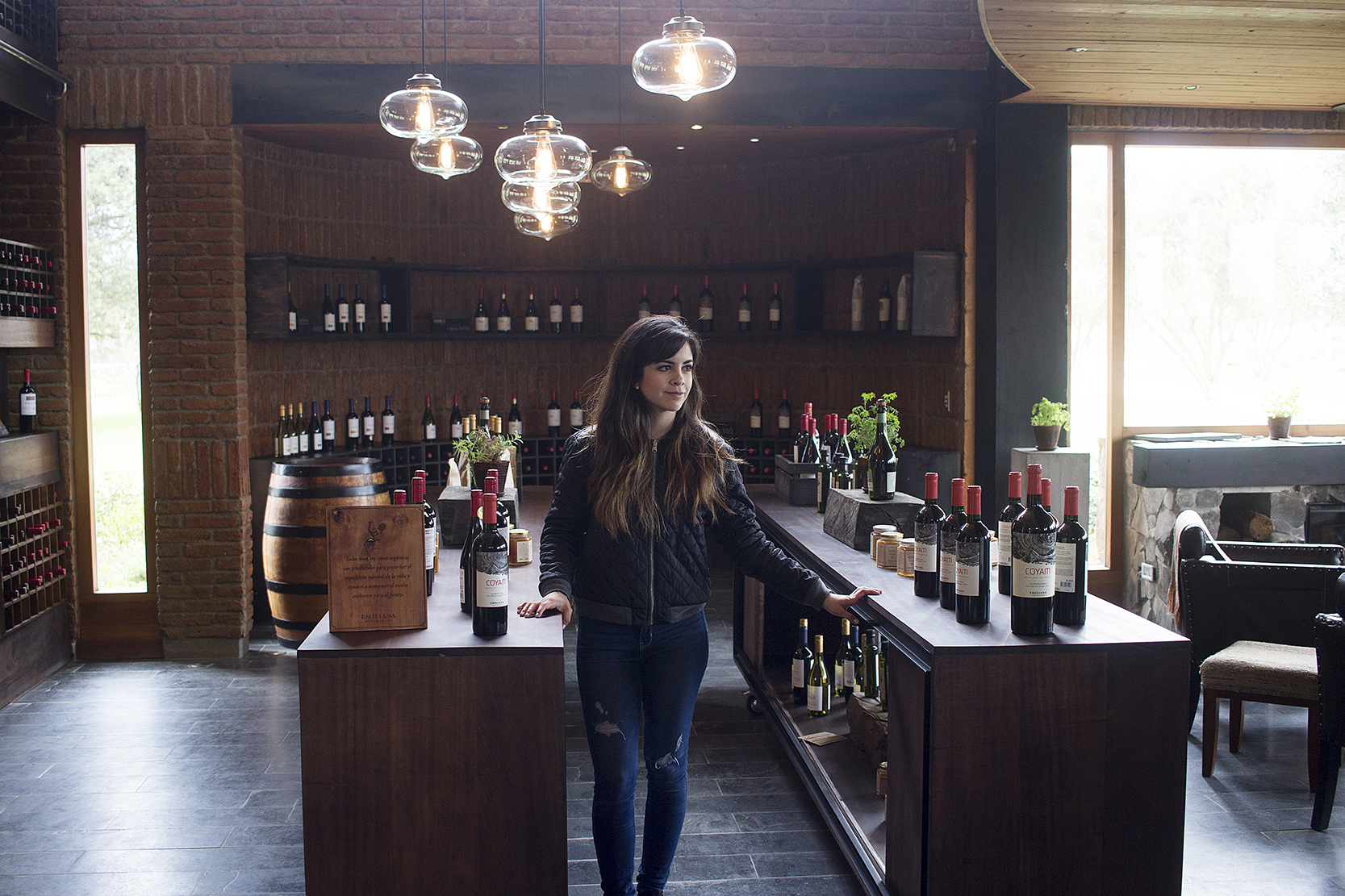 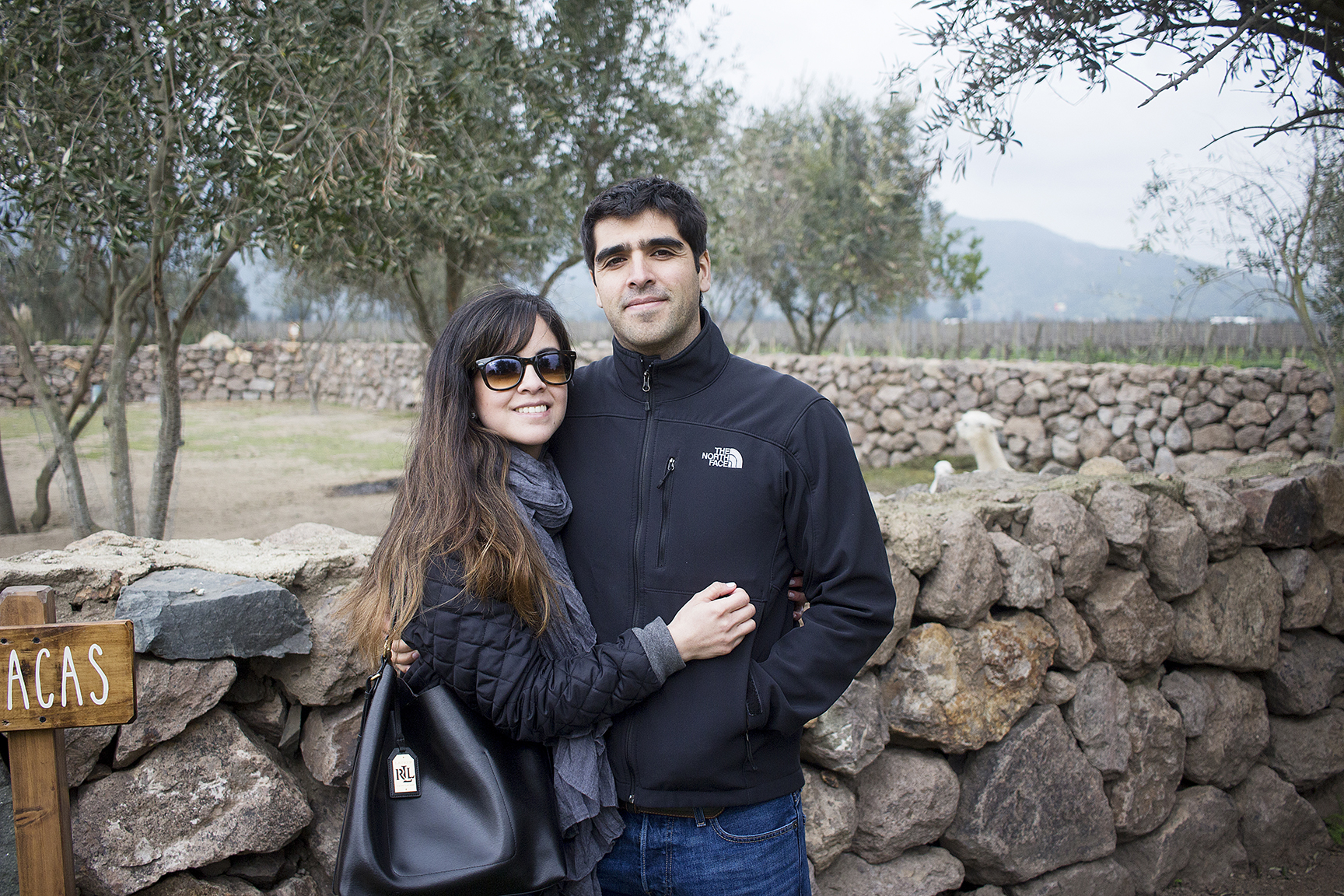 Me and my boyfriend 🙂 Alpacas at the back

They say that they don’t aim to make premium wines, but they inevitably do when they take such a good care of their organic vineyards. The ecosystem within the vineyard is healthy (the animals, bugs, soil, etc.) which in turn makes the grapes of good quality and thus making an astounding wine. 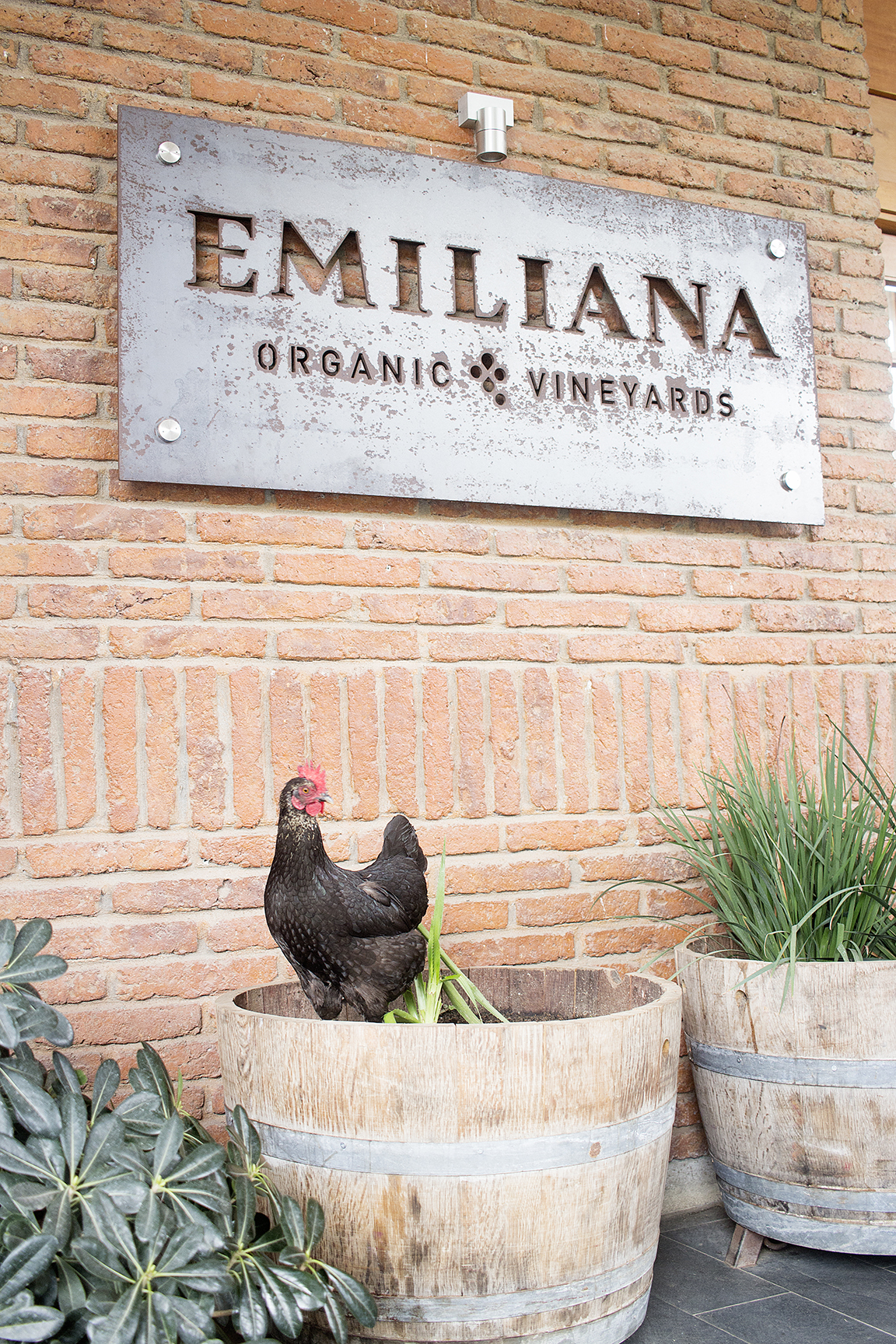 The thing that seemed most curious about the vineyard is the use of hens and roosters to keep away pests. They are transported in a chicken coop on wheels to the areas of the vineyard where they are needed (I wish I was transported that way every day!). In this way they can naturally remove any pests that could be present. A yummy treat for them and a better health for the vines, keeping them organic. 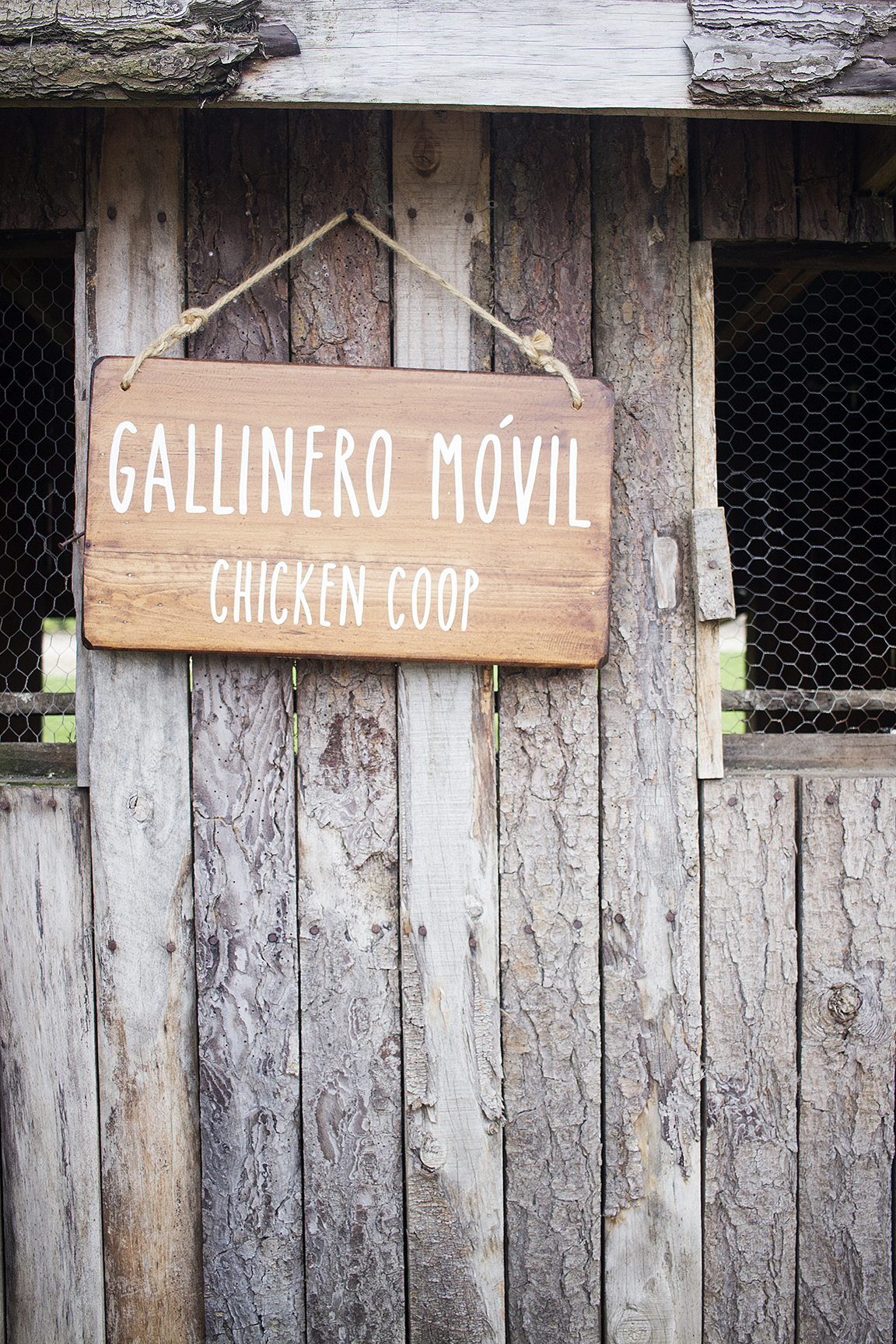 The other way in which they prevent grape-thirsty bugs from eating away the vines is by creating more suitable habitats for them in between the corridors with other plants. This way they don’t have any reason to go over to the vines for food. Savvy, right? 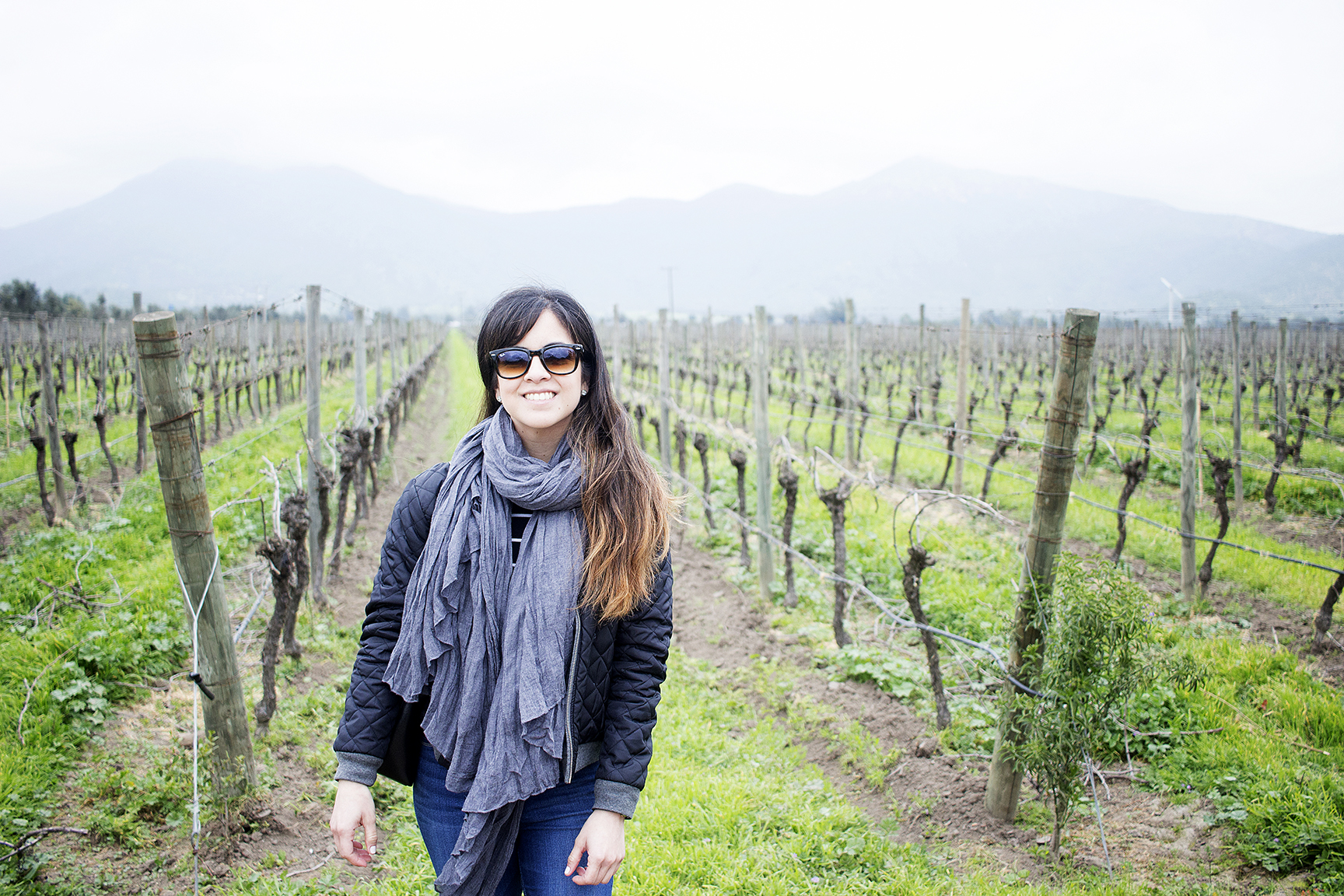 As a fertilizer they use compost to ensure that the vines are receiving the right amount of acidity and nutrients that they need to produce the greatly valued grapes. The other way in which they make sure that the soil has the nutrients it needs is by carefully choosing the plants that go between the corridors (yes, the same ones that keep bugs away) as they provide the necessary level of Nitrogen to the soil.

Biodynamic agriculture considers farms and, in this case, the vineyard, as a complex ecosystem where balance is found not only in the vines themselves, but it relies also on other actors such as bees, falcons, trees, etc. In the case of Emiliana this is not different. They even consider moon and sun cycles to program the processes in the vineyard. 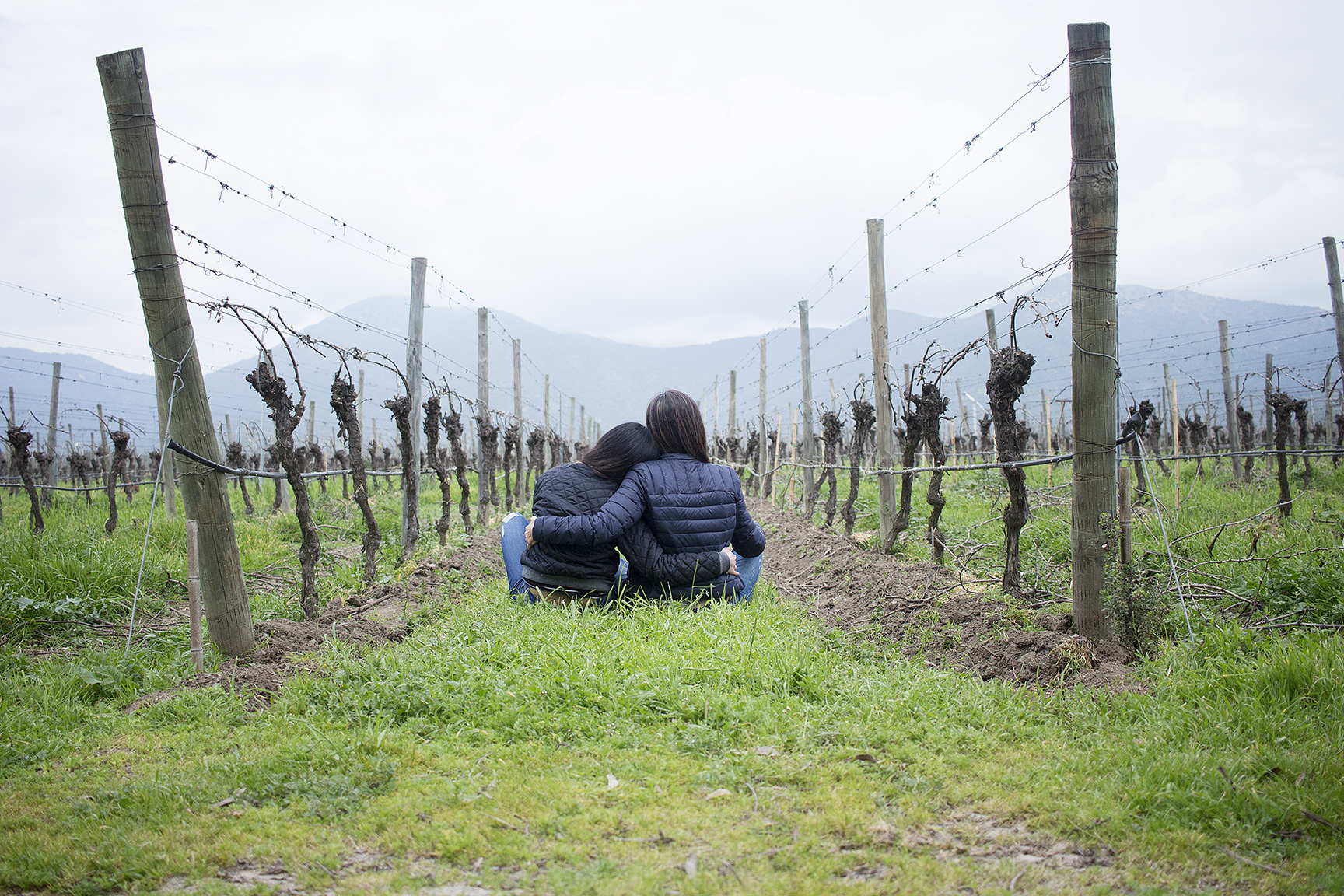 With my sister in between the vine corridors <3

To ensure that the biodynamic of the area isn’t altered they keep native trees and plants around the vineyard. This attracts bees, birds of prey as well as other species. This serves to maintain the habitat intact as well as the way in which each element interacts with the other. 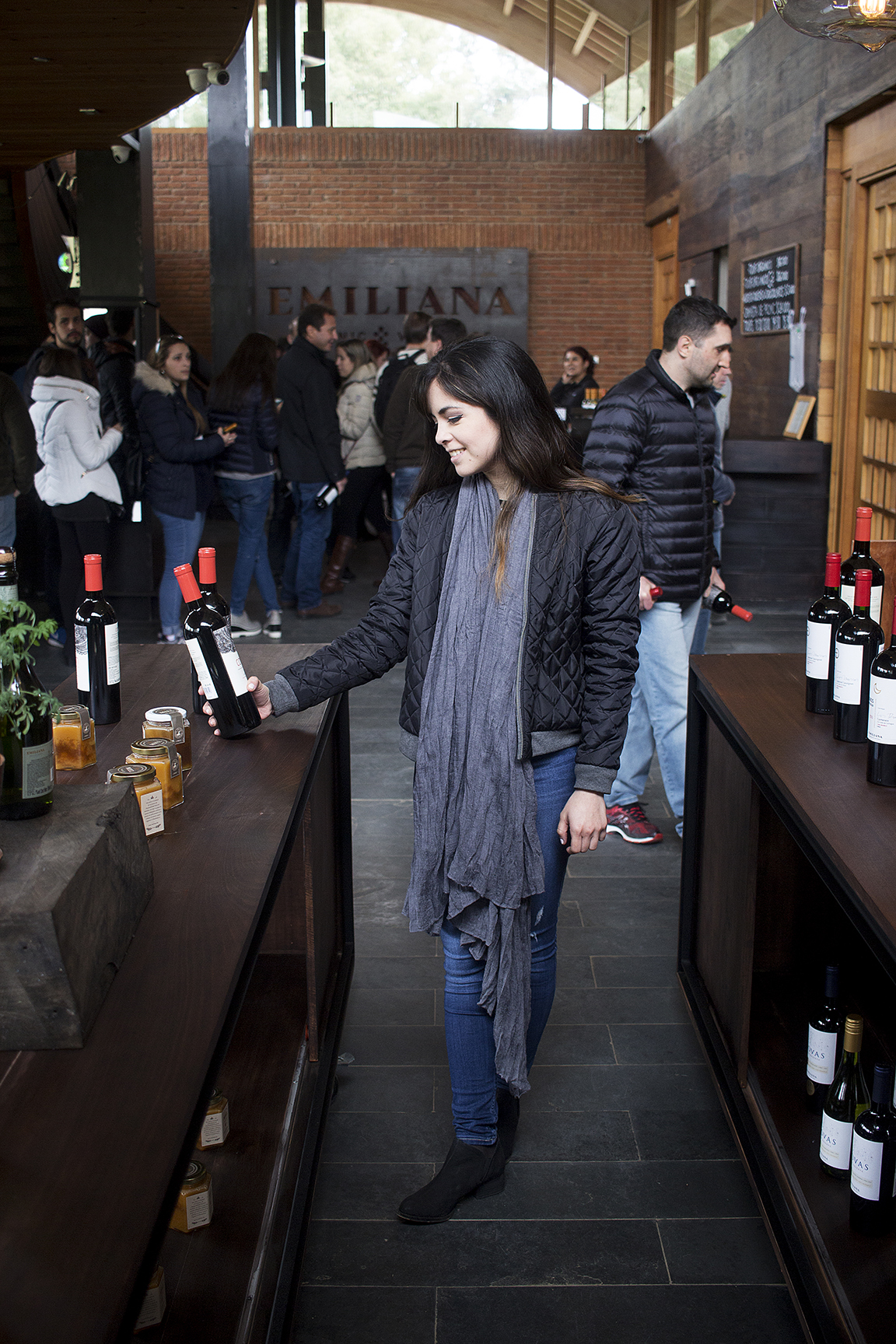 Besides keeping an organic vineyard, Emiliana also has this really nice initiative where they help out their workers by allowing them to profit from byproducts from the vineyard. For example, they keep bees to help with pollination (part of biodynamic agriculture) and then the workers sell their honey in the wine shop. The same happens with the olive trees that help trap dust at the edge of the vineyard: they process the olives to make olive oil and also sell it at the shop. All profits go to the workers in charge of the vineyard that often live in the surroundings. 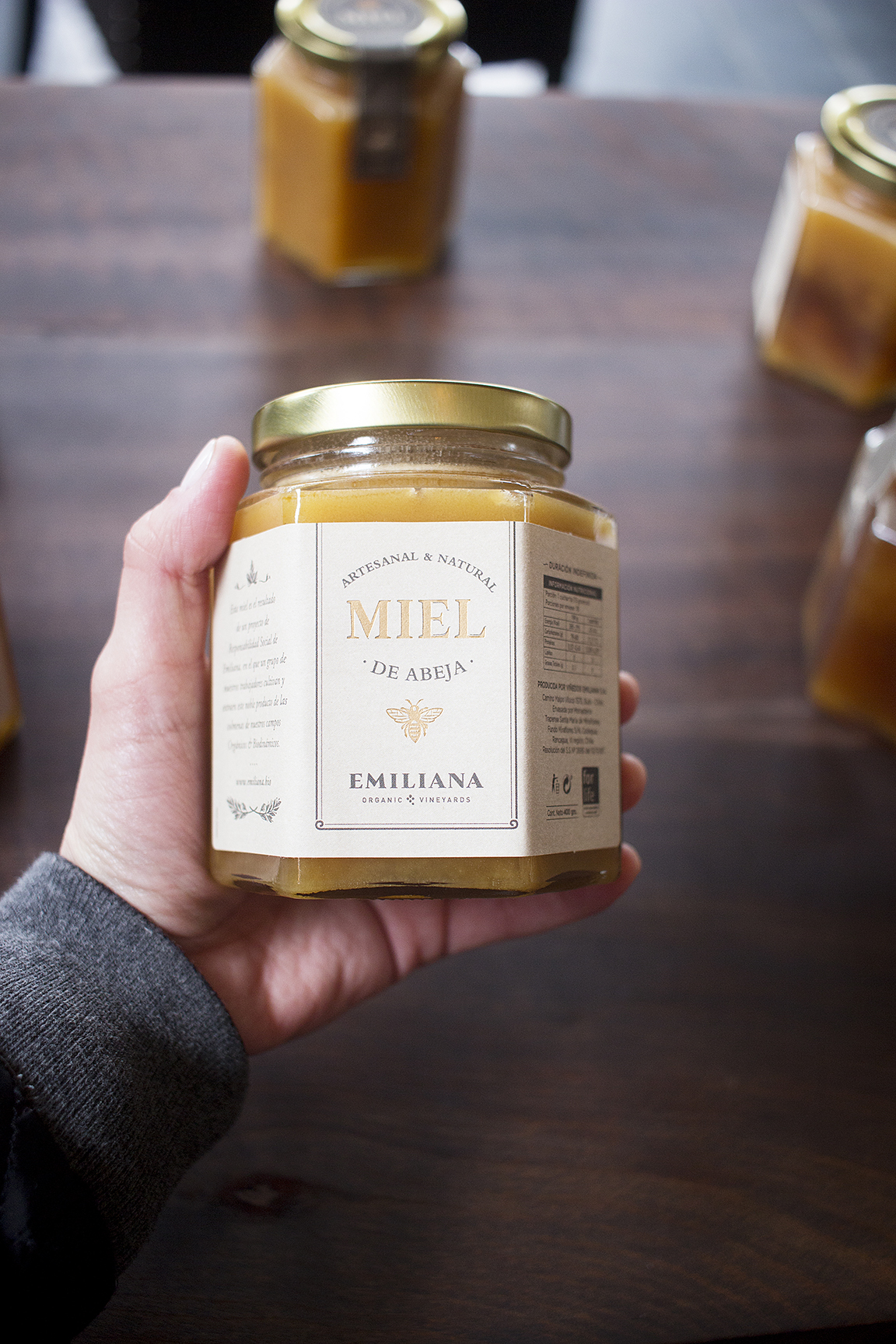 My favourite encounter with the biodynamic vineyard (besides the wine, of course) was definitely the Alpacas. They’re so cute! And there were 2 baby alpacas, too! The workers are also in charge of them and receive all the profits from selling products made with their wool.

By now you must be thinking “yeah that’s alright, but is the wine any good?”. Oh yes it is. After touring the vineyard we headed over to the house (“casona”) where we tried some of them out. Although I was ready for the wineshop! 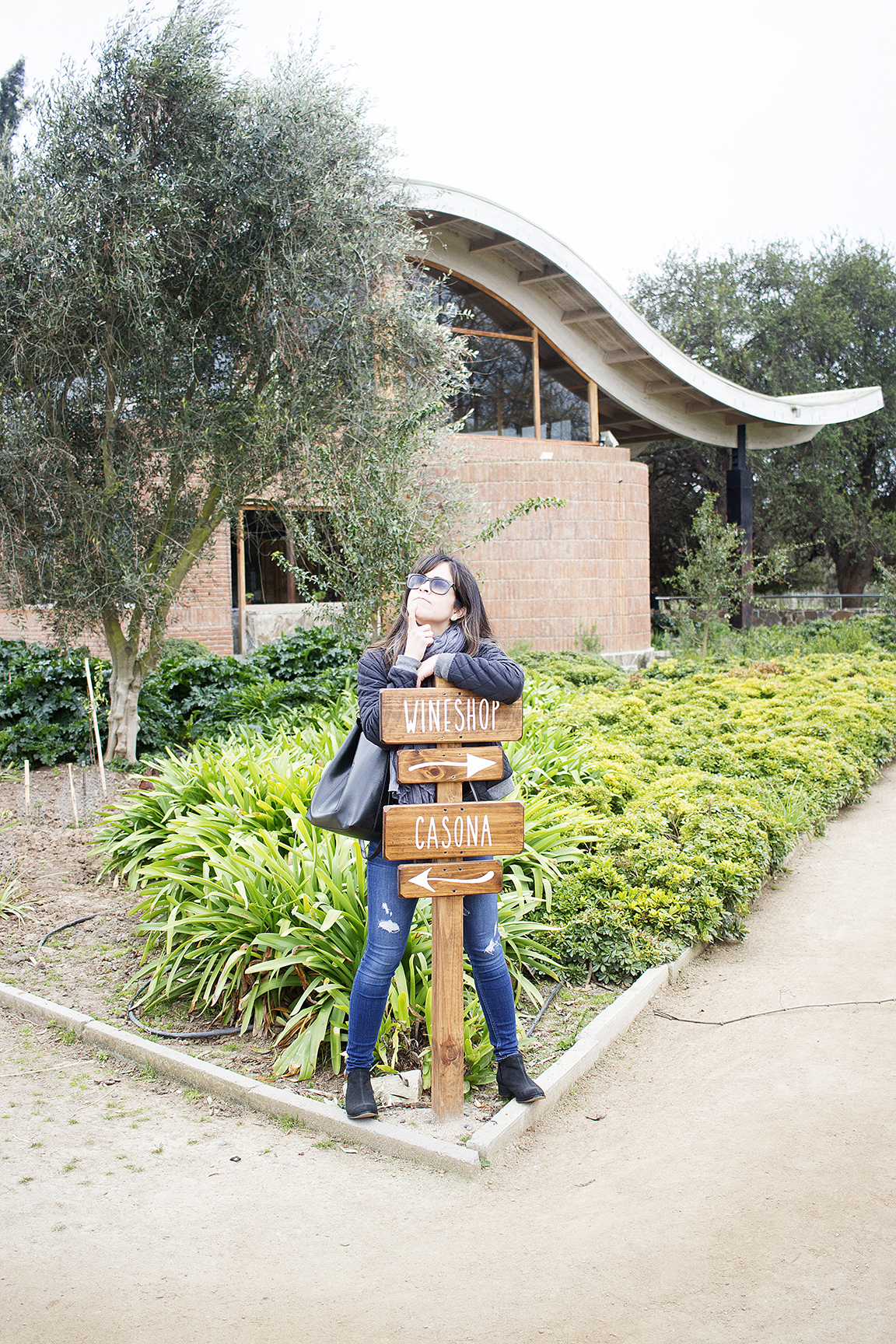 As any vineyard, Emiliana has different “collections” of wines which vary in price and profile. It starts with Adobe Reserve which is a really nice wine that offers both white and red varieties. Its star is definitely the Carbernet Sauvignon. After that comes Novas Great Reserve, also noticed for its Cabernet Sauvignon. 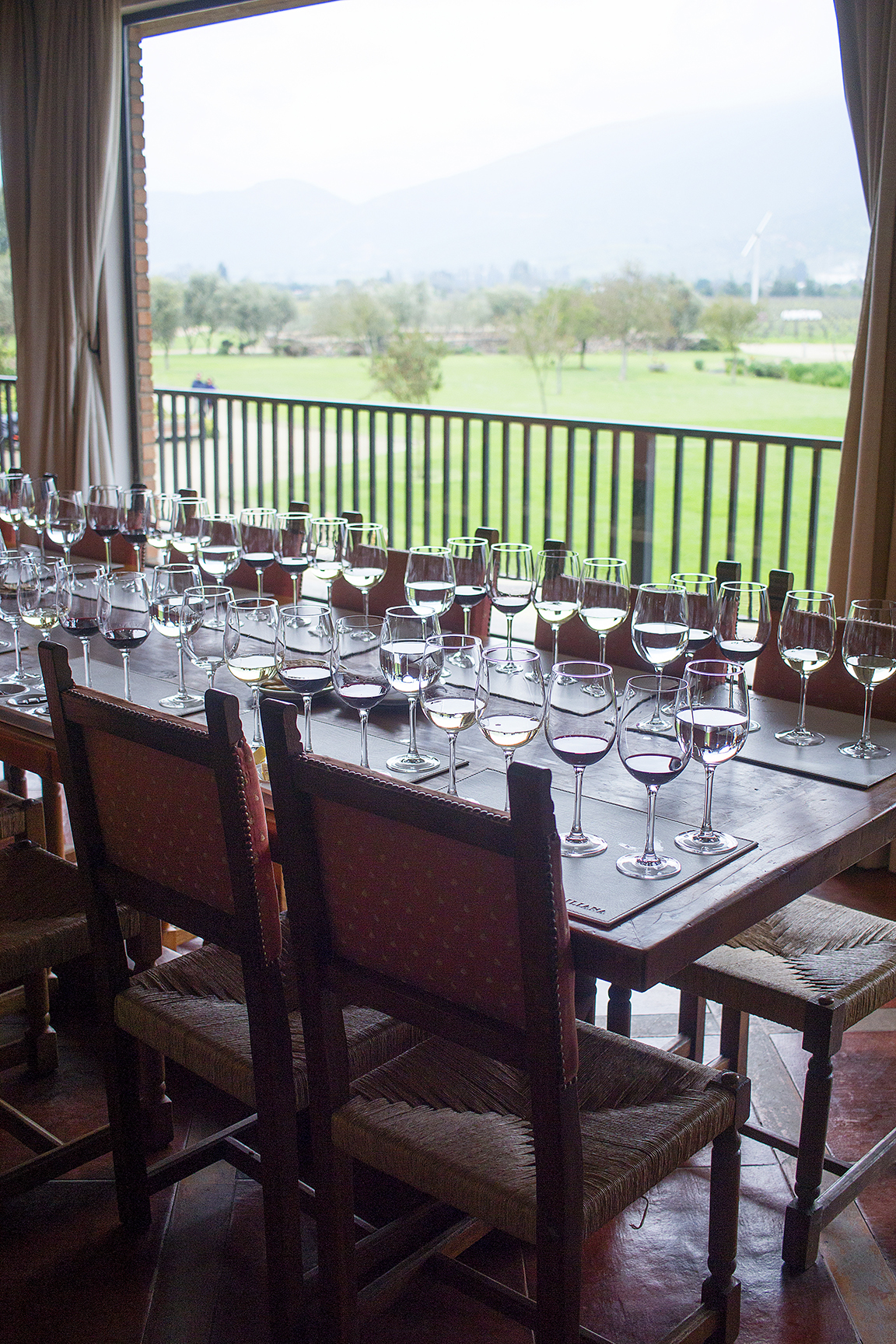 The premium line is called Signos, which I tried at the tasting. The Carménère has won several awards and it’s extra special because Carménère is the grape that Chile is recognized for worldwide. It reapeared in this country after it was thought to have disappeared from the face of the Earth because of a fungus that attacked them in its origin; the Bordeaux region in France. 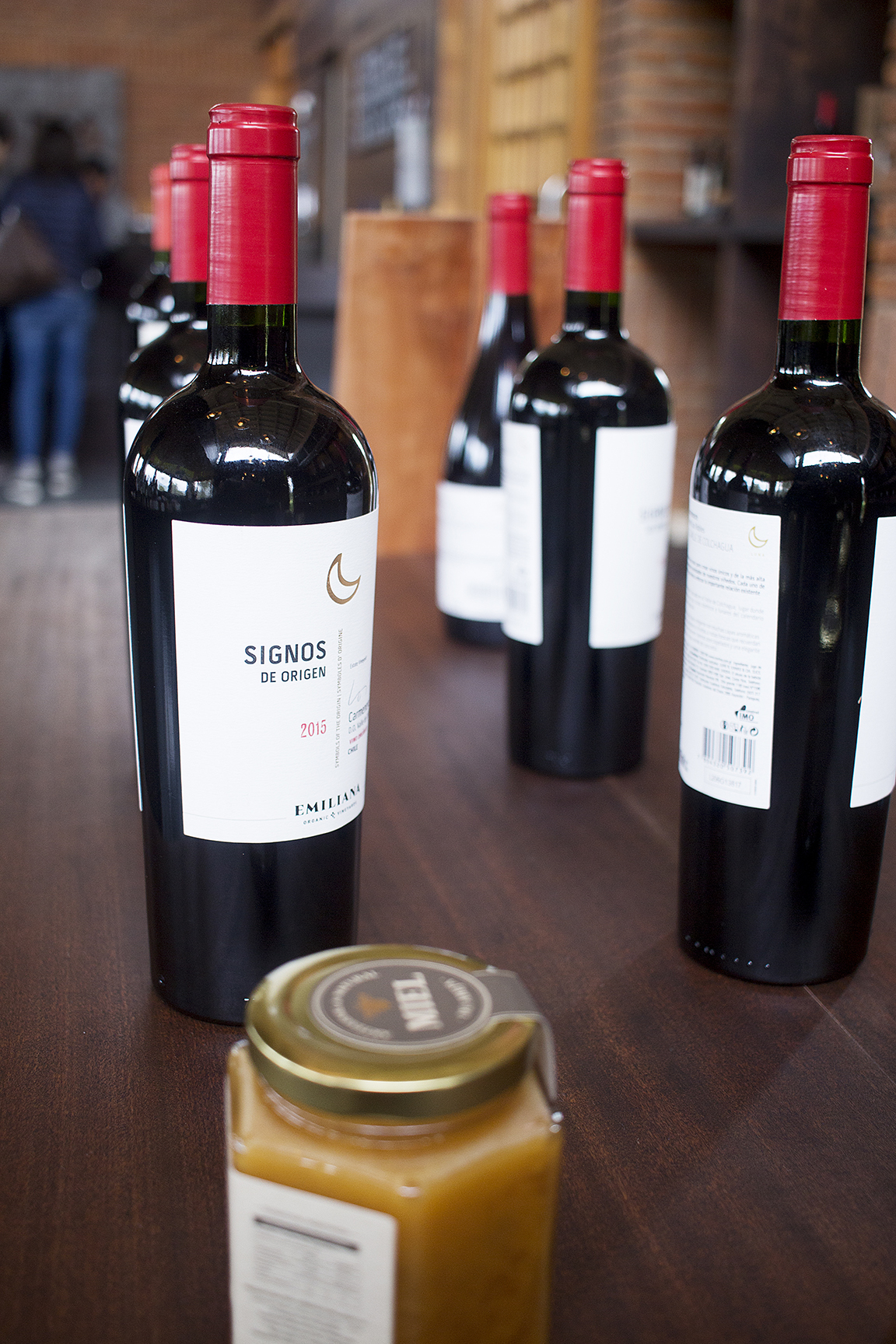 The first wine that this vineyard ever produced is called “Coyam” and it’s made with a different blend of grapes each year. The one I tried is mostly Carménère and Syrah… my favourite grapes! It’s certainly more pricey than the previous but it’s soooo worth it; I enjoyed it a lot when we tried it. 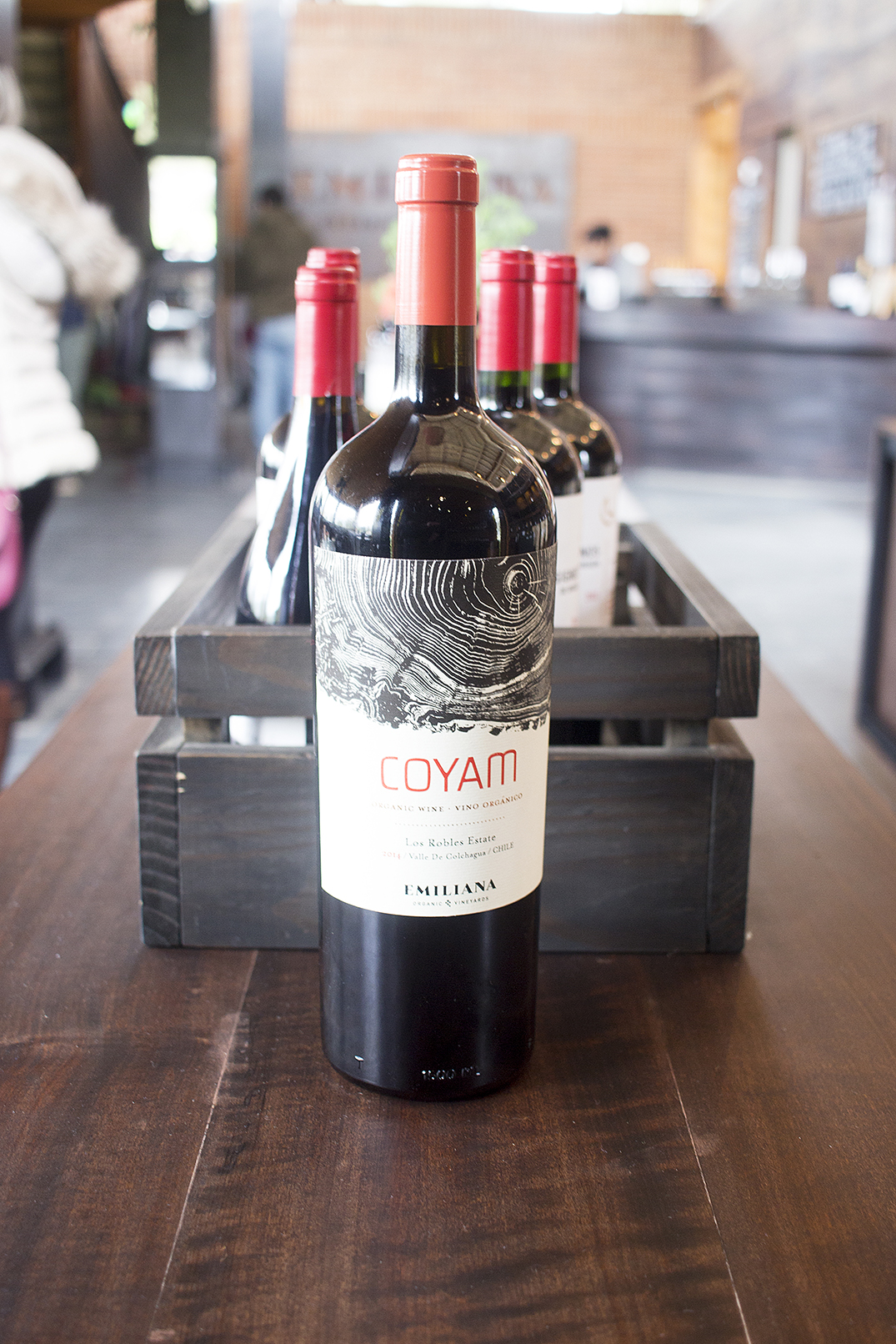 The last wine that we tried wasn’t actually at the vineyard but afterwards. We bought a bottle of Gê, which means “Earth” in greek. It has a very small production (about 6,000 bottles) and we bought one to have with dinner later that day. It was exceptionally good. I won’t bore you with the complexity of its aroma because I’m not a wine expert, I just love wine and thought that this one was really nice and smooth, fruity and perfect for the piece of beef I had for dinner. 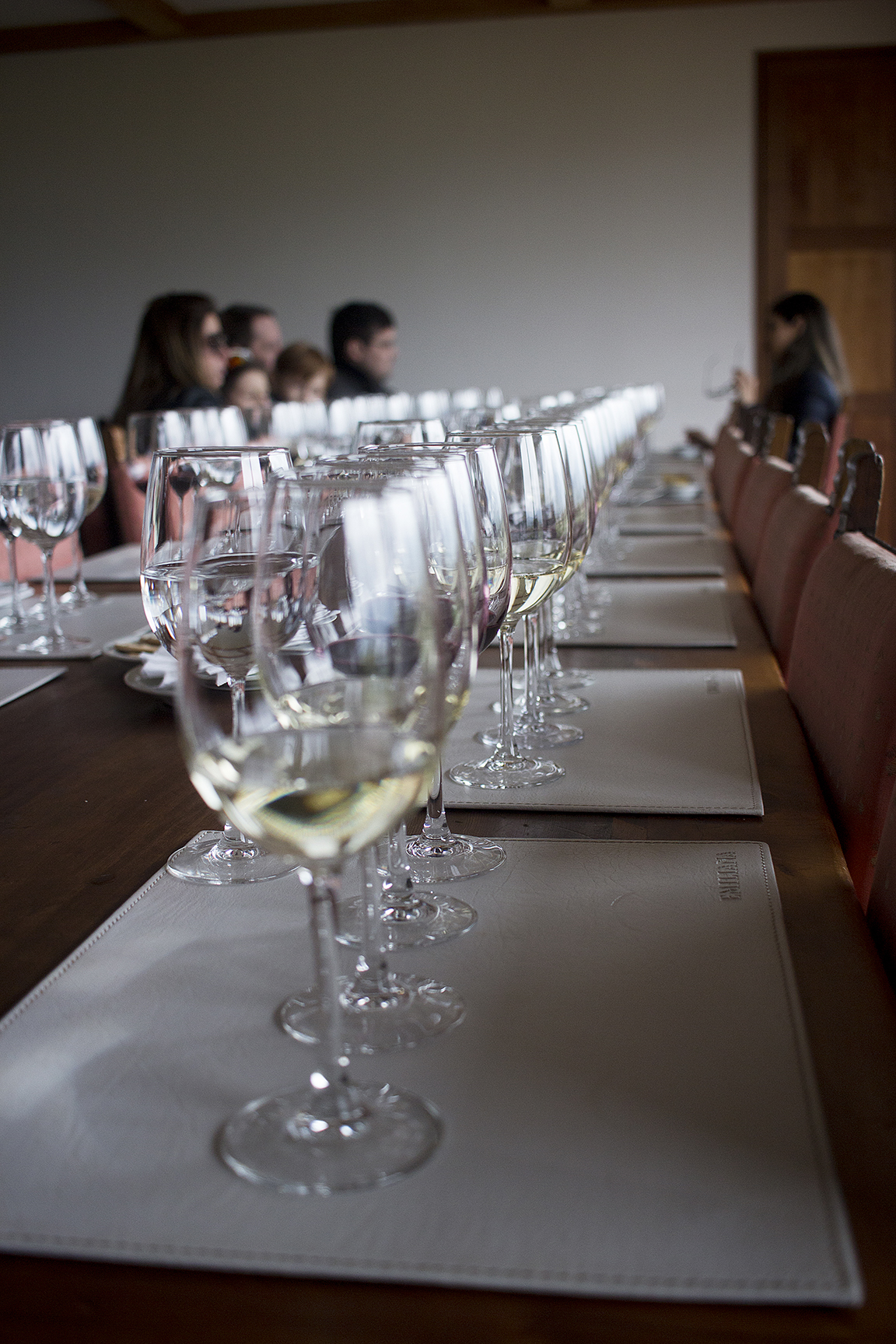 My sister, my boyfriend and I had a blast at the vineyard and definitely recommend that you visit Emiliana if you get a chance. You can find more about them and their wines in their webpage: http://www.emiliana.cl/ 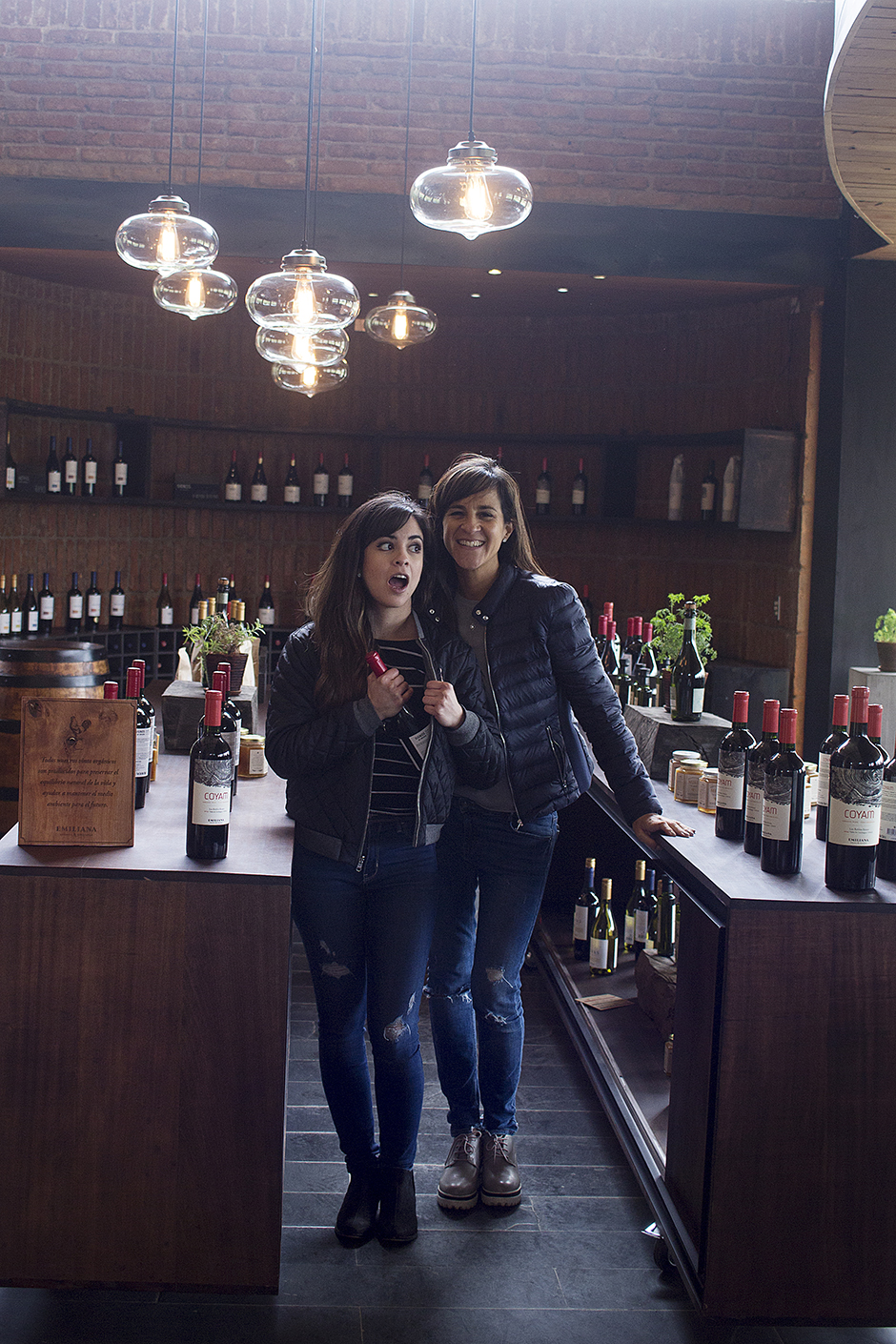 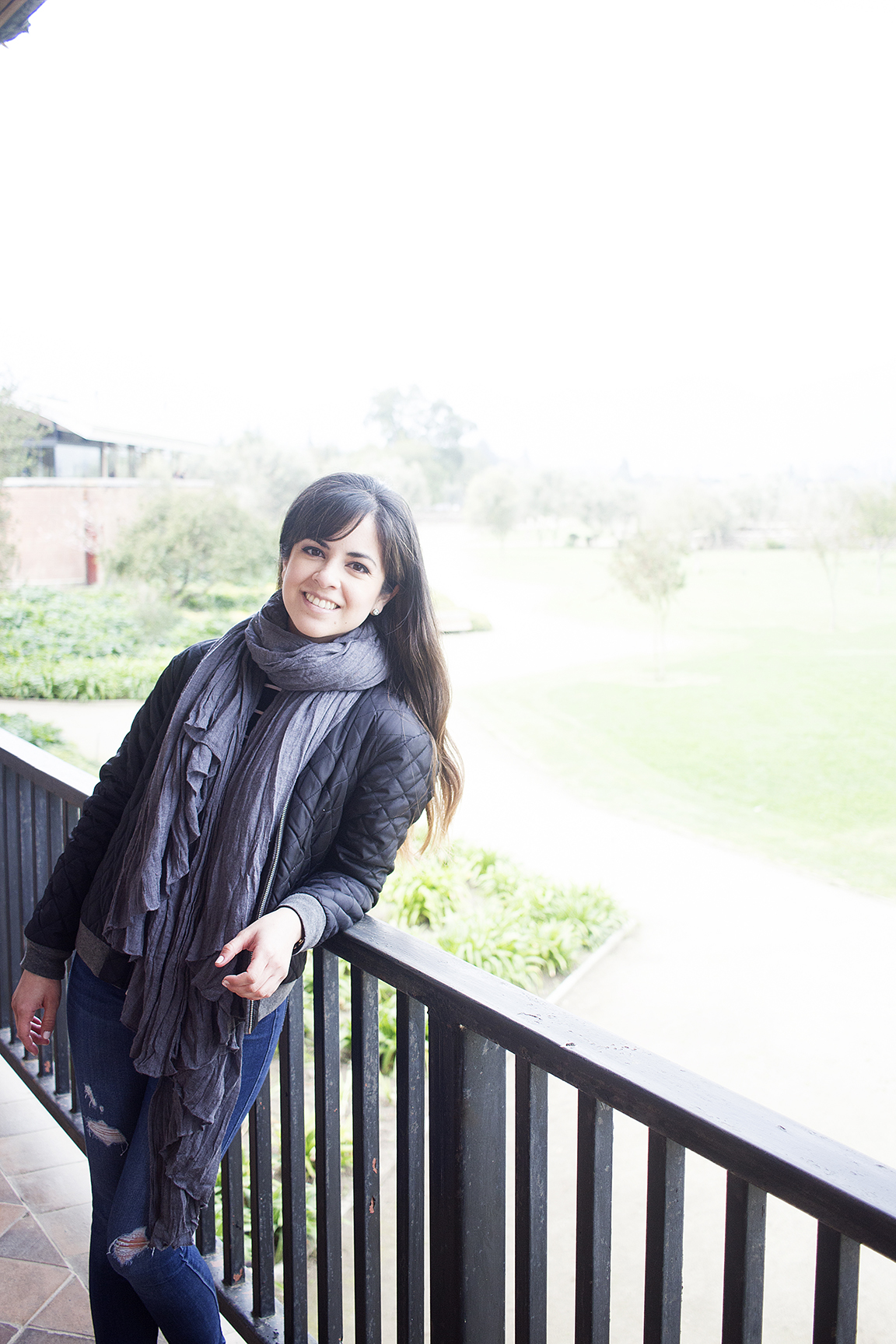