Bbq ribs with coleslaw and potatoes

BBq ribs are one of those dishes where you get your hands and half your face dirty and are still so happy on the way there. And what better way to serve them than with coleslaw and roasted potatoes. Oh, I also made my bbq sauce because there’s just so much satisfaction in being involved in the whole process :).

What you want to have in bbq ribs is soft and extra tasty meat. For that reason, we roast them on a low heat and rub them with spices first and then with loooots of bbq sauce. Isn’t it the worse when someone brings over ribs with no sauce on them whatsoever? I actually get angry about it! Lol. Here there’s no lack of sauce, believe me! I made my bbq sauce in this case but if you have a favourite go-to store-bought bbq sauce, go for it. However, it is really delicious and quick to make. You’re going to want to eat it with a spoon!

I love love love coleslaw salads. It’s delicious, colourful and one of my favourite side dishes definitely. The most basic version of this coleslaw salad doesn’t have any green apple but I LOVE it with apple. Also, I added dried cranberries which gives it a sweet dose as well. A while ago I used in on my pulled chicken recipe and before that on my Korean bbq tacos. For the dressing, you can use a light mayonnaise or even vegan if you prefer.

Besides the coleslaw, I also roasted potatoes. As you can see, it’s a whole dinner, people! First I boiled them and then I placed them in the oven, but they can actually go straight in the oven as well. I did it this way just because I couldn’t fit both the ribs AND the potatoes at the same time. Another option is to cook it in the water and then transfer them to a pan and give them a nice tan on there. So many possibilities :). 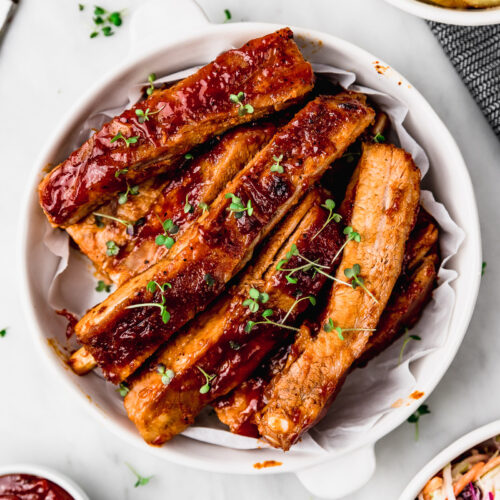 Bbq ribs with coleslaw and potatoes