These bbq wings are a classic and the best part is that everyone likes them. You can make them and know that several people will go crazy over them. The bbq sauce I used is the same homemade bbq sauce we made a couple of weeks ago and I seriously think that it’s much yummier than the store-bought ones.

Is there any other kind of bbq sauce that you like? I love honey bbq, spicy, Asian, all of them. Let me know in the comments of this post if you would like me to teach you how to make any of these and which :). Whatever the flavour, these wings are really yummy and extra sticky. Dirty fingers are a good indicator of good wings.

As I said on my bbq sauce post, you want to use nice ketchup as a base for it. You can use this bbq sauce recipe for anything you like, as these wings for example. I know that you also want me to teach you how to make bbq ribs. So in a few week’s time, after Christmas, I’ll be teaching you how to make them with a video and everything :). This bbq wings recipe is really simple so it wasn’t really worth it to post it with a video. 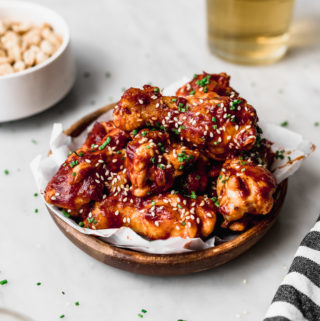 For the bbq wings

For the bbq wings