A chopped cheese sandwich is like a cheeseburger that gets chopped and mixed with onions. It’s a really delicious New York meal, you won’t be able to resist making it.

Chopped cheese gained popularity in New York, where it appeared in bodegas in Upper Manhattan, the Bronx and Queens. It’s typically made on a large, hot grill where you would grill burgers, for example. It’s like the cooler brother of a classic cheeseburger. You add the beef onto a hot surface (I used a cast iron skillet) and then press it like a smash burger to caramelize it on one side. You want to leave it still for a couple of minutes so that it can really go golden. Then you start chopping it; hence “chopped” cheese. You add the cheese on top, let it melt, mix it in and done! I wasn’t familiar with this sandwich until I found it while on Instagram. I became immediately obsessed and knew I had to make it.

Bread is a key component in any sandwich. In contrast to people, it’s not only the inside that counts. In a chopped cheese sandwich, the classic choice of bread would be to use a long roll such as a hoagie or hero roll. It’s not set in stone, though. The important thing is that it’s a soft bread rather than a crusty one. You can alternatively use a brioche bun or a potato bun. The other important thing is that you toast the bread to give it even more flavour. I like to toast it with butter in a frying pan over medium heat. I recommend that your bread is toasted and ready by the time the filling is done since it comes together really quickly.

When you ask for chopped cheese, they usually wrap it in foil so it remains warm. It’s usually a couple of minutes since they hand it to you until you actually eat it. That means that the buns steam slightly inside the foil, making it softer. That’s really nice for a sandwich like this and makes it nicer to bite into. It’s optional but you know I like to show you all the extras and then you can choose what to do. 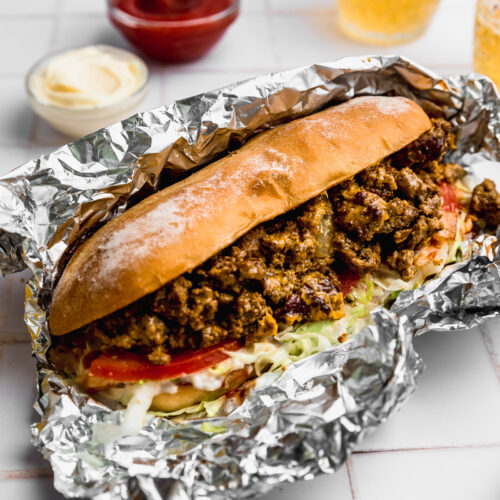