My favourite cupcakes are definitely red velvet. They are magnificently soft and spongy. The red velvet flavour differentiates itself in that it has cocoa powder, vinegar and also red food colouring. If you’re worried after that, don’t because the vinegar cooks off, it just helps the velvety texture. Way back when it was created, it was dyed with beetroot. However, I would much rather eat the modern version. The strong red colour really makes them perfect for Halloween.

The only frosting I eat and thus my favourite is the cream cheese frosting on these red velvet cupcakes and also on my red velvet cake. I like that it doesn’t feel as greasy when you eat it as with only butter buttercream. The cream cheese also balances the sweetness and makes it extra delicious. You want to beat the butter and cream cheese long enough to get it nice and white. It will take about 5 minutes to get to that sweet spot. After frosting the cupcakes, refrigerate them, especially if it’s a hot day. This frosting is the classic pairing for red velvet cupcakes. It makes for a nice contrast with the red for Halloween.

Since these are Halloween red velvet cupcakes, I wanted to drizzle them with a sauce that looks really bloody but delicious. That’s why I made this raspberry sauce and it was delicious! The concept started by thinking about Eleven, one of the main characters in Stranger Things (Netflix). When she uses her mental powers, a line of blood comes out of one of her nostrils, hence the inspiration, lol. I hope you get the reference. 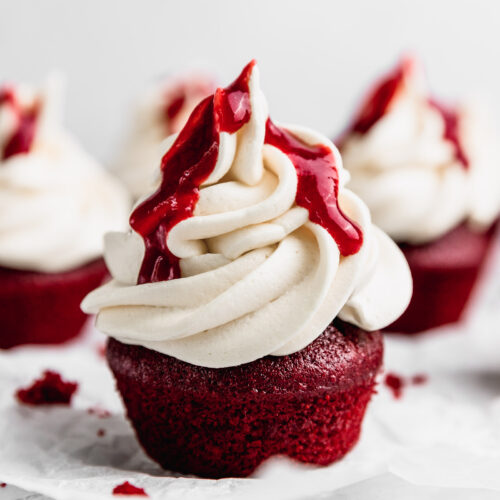 For the red velvet cupcakes

For the raspberry sauce

For the cream cheese buttercream

For the red velvet cupcakes

For the raspberry sauce

For the cream cheese buttercream