I feel that after making this bread I’m officially the queen of cinnamon rolls. This cinnamon roll bread is gooey, soft, cinnamony and simply spectacular. The braiding is really pretty, making it the perfect gift for when someone invites you over for dinner. It’s also perfect for then you crave cinnamon roll bread, then you can just make it for yourself, lol.

This bread is a modification of my cinnamon roll recipe. I have used this recipe so much that I think I should stop, but then I don’t. I have made apple cinnamon rolls and coffee cinnamon rolls with that same recipe as a base and they’re so good! The difference between this recipe and my cinnamon roll recipe is that I knead the dough for the bread. This I do to strengthen the gluten and thus helping it proof and bake nicely in a bread form. I also added less sugar and cinnamon. The result is extremely soft and delicious. It’s honestly my new obsession.

To make this braid I was inspired by my friend Ari from @wellseasonedstudio. She made a Braided Pesto Bread that looked SO good, there was just no way that I wasn’t going to be inspired. She cooks up amazing recipes for you guys so definitely go follow her <3. It’s one of those friendships that I have made through Instagram that I love and make me say that the Internet can give us such good things.

Down here I show you step by step photos for the braiding of the bread. Once you stretch the dough in a 30x40cm or 11.8×15.7in, you paint the butter on the dough and then you spread the sugar and cinnamon (mixed) on top. Then you roll it up starting from a long edge. After that, you cut the roll lengthwise using a sharp knife. Keep the interior of both halves looking upwards and cross them at the centre forming an “X”. Then you twirl them to the top and then to the bottom, always keep them with the cinnamon interior looking up. Prepare a 22x11cm or 8.6×4.3in mould with baking paper before placing the dough inside. The dough will let go of some sugar during the cooking process so you want to have some help taking it out after cooking. To place the dough in the mould you fold both ends towards the inside and meet them at the centre. In that way, you get the nicest part of the braid at the top. 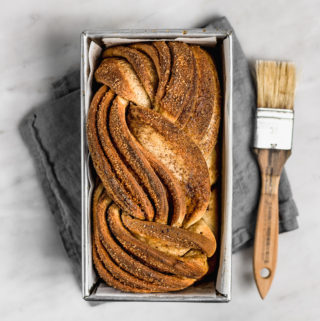 For the sugar filling