I looooove mushrooms! With pasta, in sandwiches, with eggs, pan fried, baked, stuffed… I could continue! But I specially love cream of mushrooms soup. This time I used white button, shiitake and portobello. What’s nice about this mix is that the first are really mild and the others have a much more intense flavour. The combination is amazing, and it’s even better when cooked with rosemary. ¡Yummy!

The first time I posted this recipe on the blog was October 2016! At that time the blog had a little over a year (I started it in August 2015) and I feel like it’s the time where I felt more confident posting content. Still there are a couple changes I’m making to that original recipe because my taste and methods have changed with time 🙂

Another thing that I have learnt while blogging is how to write recipes. It’s not always easy to explain each step in words. It’s even worse when you’re talking about a texture you need to achieve in the process. With time I’ve gotten better at it and it’s even easy now to answer in the procedure a few questions I usually get.

This recipe for cream of mushrooms soup is spectacular. I know the colour is not a selling point, lol, but I sweat it’s incredible. Ever since winter started I’ve already made it 3 times because I love it crazily. It’s also great to freeze if you’re into freezing your life ;). I serve it with a drizzle of balsamic vinegar and also cream if I feel like it. 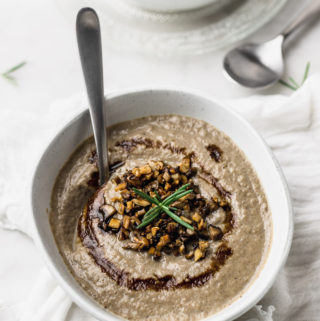