I have so many cheesecake recipes on the blog now that I must be very apparent to you that it’s one of my favourite desserts. These dulce de leche cheesecake bars are delicious, with that caramelized flavour we love and the perfect texture.

Cheesecake is one of the desserts that I made at home while I was attending university. I made it for my friend’s birthdays and special occasions :). My recipe has changed a lot since then and I have perfected it as time has gone by! Now I love my recipe and its proportions and wouldn’t change anything about it. If you like cheesecake with caramel-y flavours I also recommend my blondie mini cheesecakes.

A cheesecake can be large like the classic one, they can be in a mini version using a muffin pan or like this dulce de leche cheesecake in a bar form. The good thing about this presentation is that it’s perfect for fewer people. The first try I did with these bars I didn’t use dulce de leche but actually manjar blanco, which is the Peruvian version. I didn’t like that one as much because you could barely feel the presence of the manjar blanco because its flavour is much more sutil. I mean, it wasn’t bad, but you certainly couldn’t taste it. That’s why I decided to change to dulce de leche which has a stronger caramel flavour.

This recipe uses sour cream. I know that there are certain countries where sour cream is difficult to find or not that common. If yo ulook for it and cannot find it, you can replace for unsweetened greek yogurt or whipping cream. However, Imust say that I have tried both replacements and I still prefer sour cream :). 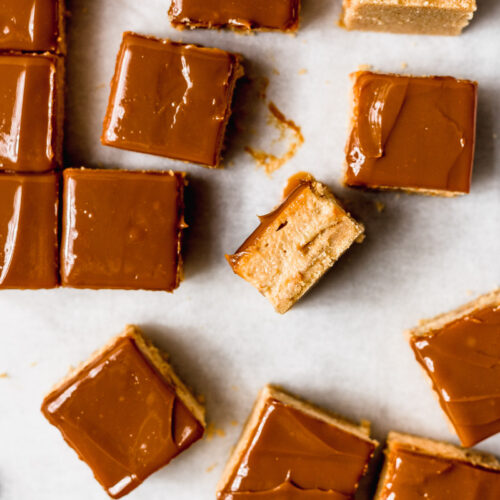