You know that I love working with chocolate 🙂 This flourless chocolate cake (gluten free) is really moist and chocolatey, I love everything about it. It’s made pretty quickly and easily. It’s a perfect dessert for chocolate lovers and it’s also apt for celiacs and people who are allergic to gluten.

This recipe was first uploaded to the blog on may 2017 but a photo update was long due. Also I’ve had this cake many times and I think it doesn’t need the icing sugar and almonds that I topped it with.

When we make a cake with flour it’s the flour that gives it structure and traps the air generated by the baking powder or bicarbonate of soda. For a flourless cake what’s done many times is to beat the eggs with the sugar generating air. It’s then this air that expands in the oven and makes it spongy.

That’s why it’s really important to be extra careful when you mix the ingredients with the beaten eggs. Even by using folding motions you’re still removing air with each movement so don’t mix beyond what’s absolutely necessary. We also used this technique to make the almond cake. 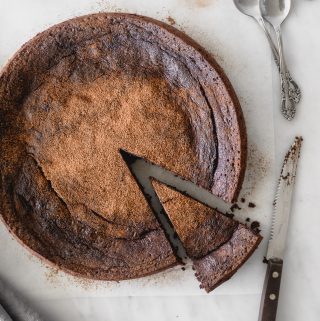 What size/type of cake tin do you use please