Aren’t cinnamon rolls SO good? It’s been a while since I’ve wanted to do its savoury and certainly not less sexy version: ham and cheese rolls. The nice thing about this recipe is that you’re going to be able to let them proof overnight and bake them in the morning. Nothing like a freshly baked roll!

Many of you make my cinnamon rolls every week as well as their apple and coffee versions. And every week I get the same question: can I proof them overnight? With those recipes the answer is no. It over proofs to a point where the flour can’t hold in the air anymore and they end up looking deflated. Here I tweaked the recipe with less yeast so that you can let them proof overnight. In this way, you can make them the night before and bake them 12 hours later.

Savoury rolls lend themselves to several variations. The one that I almost made was the pizza version, which would be this plus pizza sauce. It’s important that it’s a thick sauce so they don’t come apart when you cut the rolls. You can also make them with several kinds of cheese, add cooked onion and garlic, pesto, etc! So many possibilities :). If you’re feeling bold, you can also paint them with garlic butter when they come out of the oven.

For my ham and cheese rolls, I used turkey ham because it’s what I always have at home. Of course, you can use any type of ham that you like! It can be pork, chicken, turkey, whatever you prefer. If you want to use serrano ham or prosciutto, I recommend that you chop it up first. This will make it easier to cut the rolls later. I also added dried oregano to my rolls and LOVED it! Best decision ever. If you like, you can also add paprika, cumin, garlic powder, onion powder, etc. 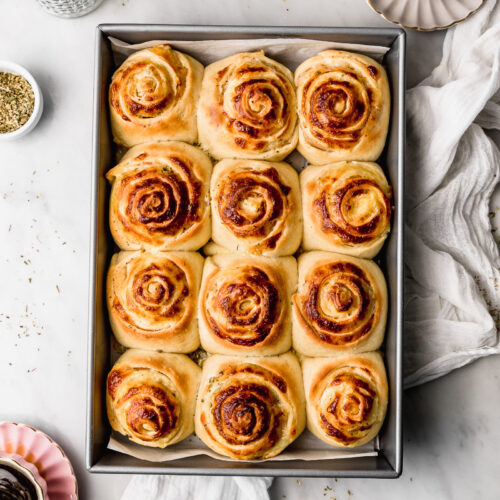 How to make direct caramel and salted caramel sauce

These turned out beautifully for me! I was craving these today, googled, chose yours and went for it. The substitution I made was to sub 100 g whole wheat flour which meant that I needed more moisture. I choose sour cream for that necessity, and it came out SO well! I’ve been baking for over 20 years so that was an eyeball situation for me. Will use this recipe again but instead make them Sweet Chili Cheddar or CheeseyMite scrolls when those are the craving.