It’s really basic to know how to make a yummy pastry cream or crème pâtissière. It is a classic filling that goes really nice with fresh fruits and is also used as a base for other recipes. It’s funny to me that I didn’t like pastry cream before. It was like that until I discovered a delicious pastry cream that’s not made from instant and intensely yellow instant powder.

Vanilla comes from an orchid which explains why it’s so glorious. Inside the vanilla pod are lots of tiny seeds which is what we use for our vanilla recipes. The pod is also quite flavourful and can be used for infusing milk for vanilla-flavoured preparations. Another way in which we find vanilla is in paste form. Vanilla paste is made of lots of vanilla seeds plus a binding agent. I love using vanilla paste because it’s less messy.

On the other hand, there’s vanilla extract which is a pod that’s left for at least a month in an alcoholic solution (vodka works really well). The alcohol takes all that beautiful taste and then you can use if to flavour recipes. You can definitely make this yourself at home. Finally, there’s vanilla essence which actually has nothing to do with the vanilla pod. It’s just a bunch of flavourings that come together in a dyed liquid. 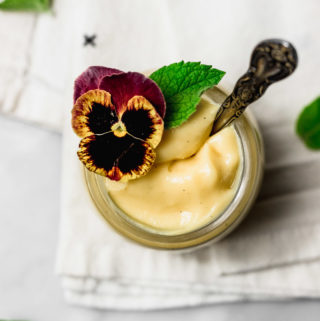