The soul of the Peruvian Ceviche is the “leche de tigre” or “tiger’s milk” which is the lime juice in which we serve the fish. It’s tasty, refreshing and a great way to start any lunch.

In its purest expression, Peruvian ceviche is maxe using fish, lime, salt, pepper, chili and onion. In time, several variations have appeared and this one is made with leche de tigre, which I love. It gives the dish a lot of flavour and it’s also helpful when making ceviche outside Perú where limes might not be as sweet.

What is leche de tigre

Leche de tigre or “tiger’s milk” is made by slightly blending fish trimmings, onion, garlic, ginger, coriander stalks and chili. Then this is passed through a sieves and pressed to get as much liquid as we can. The reason why it looks milky is that the fish trimmings danaturalize with the lime and it gives a white-ish precipitacion. It’s delicious in Peruvian ceviche.

Is there milk in leche de tigre?

As you can see in the leche de tigre recipe, there’s no milk of any kind in it. There are a handful of recipes that add a splash, usually in tiraditos. However, traditionally it’s not included in Peruvian ceviche. You can use red or brown onion to make the leche de tigre. Red onion will give it a pink hue and brown onion gives a whiter result.

The fish for ceviche

The most important thing for a Peruvian ceviche, more than the type of fish, is its freshness. Depending on where in the world you’re reading this from, look for fish that you can get caught on the same day that you make the ceviche or maximum the day before. Ideally go for low-fat fish, with white or pink filets. Fish like salmon for example go better in a tiradito. And if you like ceviche, you have to try a “ceviche carretillero” that has squid chicharrón on top. I also highly recommend my tiradito apaltado. 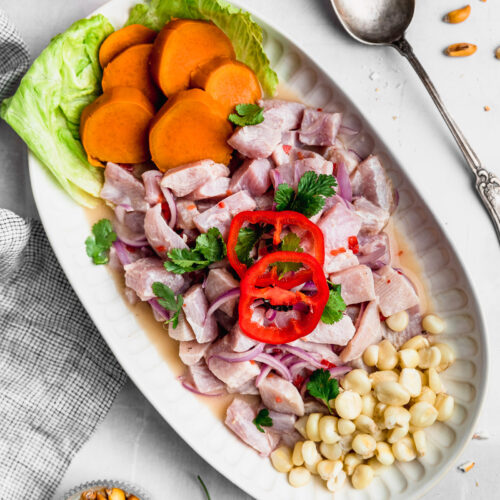 For the leche de tigre

For the leche de tigre

This is so delicious I love it

[…] among my favorite mixtures is ceviche with squid chicharrón. I really like the combo of the freshness within the ceviche with the crispy […]