We all need a recipe to save us when we’re in a hurry and this tomato soup is exactly that. It requires zero work and yet the result is too delicious. You also need very few ingredients and you can even freeze it perfectly.

I came up with this recipe for my boyfriend one day I was sick. He wanted to make something that wasn’t heavy for dinner. I glanced at the fridge and noticed we had tons of ripe tomatoes so I told him to place the tomatoes and a bunch of other ingredients on an oven tray and just pop it in the oven and blend it later. He told me “that’s it?” and I answered “that’s it” and returned to bed. The result was SPECTACULAR, it has amazing flavour with very little effort involved.

A few weeks later he made it again. I posted a couple of pictures on my Instagram stories showing that Javi had cooked it. Moments later a couple friends start saying that no way he did it on his own and that I probably helped him hahaha. We had to invite them over for dinner so they believed him! Although now that I think of it, it probably was a trap to come over for dinner.

Now that winter is coming along there’s nothing like a nice tomato soup or veggie cream to stay warm at nights. It’s my favourite dinner for winter :). Let me know on the comments below what other type of winter recipe you would like to see. 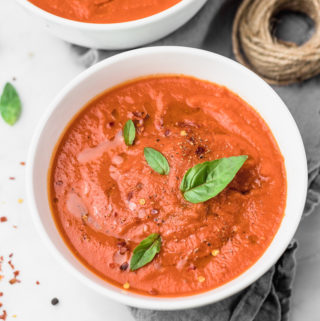