Here we have a passionate and uncontrolled love for cookies. If you don’t like cookies then you don’t belong in our (not so) exclusive club. I especially LOVE soft cookies and if there’s cinnamon involved, then all the better. These super soft snickerdoodle cookies are AMAZING, one of my favourites absolutely.

If you like cinnamon as much as me, you need to make these soft snickerdoodle cookies. Also, I highly recommend that you check my other cinnamon recipes. Out of those, one of my best is the cinnamon swirl bundt cake. It’s just crazy good. Cinnamon is the perfect spice to go with a cup of coffee or tea. Nothing is yummier than the smell that comes from the oven as something cinnamony bakes. I always picture it like on Tom & Jerry when the smell of something yummy lifted them off the ground and carried them to the origin of the smell. If you don’t know what I’m talking about, you’re too young and I envy you, Google it :).

Now that I’ve made them and LOVED them, I want to make them in a Christmas spice version in about a month from now. Of course, cinnamon is included in the Christmas spice mix, but I also add in some cloves, nutmeg and ginger <3. Speaking of Christmas, I have already activated the Christmas section on here in case you feel the cheer already.

For these super-soft snickerdoodle cookies, and in general in all cookie recipes, the baking time is extremely important. In order to get them soft, you need to cook them just enough and no more than that. Don’t worry if they don’t look golden because they shouldn’t get golden. The furthest it should go is juuust starting to get golden on the edges. When you take them out of the oven they will be so soft you won’t be able to pick them up, that’s perfect :). You will also notice that they will come out of the oven a bit inflated. They will flatten out as the minutes go by, that’s also normal! What you can do to get the baking time just right is to first try out with one cookie. Then, adjust the time for the rest of them depending on how that one baked. 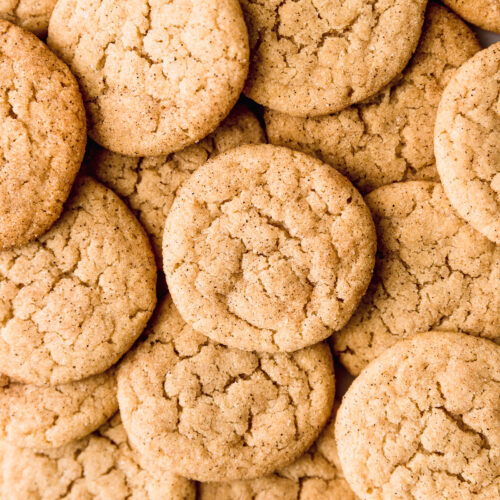