It might be that this winter is making me post lots of apple recipes. It also might be that I post them because they make me deeply happy, lol! This apple strudel is DELICIOUS. I also like to teach you how to make the dough that makes this dessert a GREAT dessert.

I first posted this recipe on July 2017 because I got many requests to show how to make it. There was also a particular interest to see how the dough is made and handled. So because I don’t have any German or Austrian heritage, I had to search for a nice dough recipe that I thought I could trust. That’s how I arrived to the blog Lil’ Vienna where I found a recipe that looked really good. So the dough recipe is by them and they also have a very nice traditional viennese strudel recipe if want to try it out. Mine however is a bit different. It has a major twist which is that I used finely chopped walnuts instead of the traditional breadcrumbs to cover the dough before rolling it out. I think it gives it an extra splash of flavour.

To serve with this apple strudel I whipped cream but you can also make a vanilla crème anglaise which is classic. To make it you can go check out my vanilla ice cream recipe and make only the crème anglaise ;). I think I prefer it with cream, hehe. It makes me feel like I’m in the set for Inglorious Basterds by Tarantino.

I know that the dough can look a bit hard to make, specially the stretching of it. However it’s what really makes this recipe be something special. Those mini layes feel incredible when you cut through them. They also go really crispy. Many people replace it with filo / phyllo pastry but I have to say they’re a bit different. 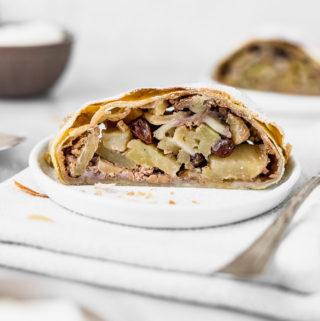 If you want to use breadcrumbs as the traditional recipe dictates, replace the amount of walnuts for breadcrumbs and cook them in the butter on medium heat until nice and golden. Once cold, add the cinnamon sugar and salt.
Tried this recipe?Mention @CravingsJournal.en or tag #RecipeCJ!