Weekends call for the best dish ever: french toast. Brioche french toast is by far the best, fluffiest and most delicious breakfast dish you can ask for. Golden on the outside, soft on the inside and served with lots of maple syrup, they’re one of those dishes that everyone loves.

The best bread for french toast

The best bread for french toast is brioche. It has a high butter content and it is fluffy and soft. These factors, in my opinion, make for the best french toast. It soaks up the soaking liquid really well and results in a french toast that melts in your mouth when you eat it. Another good bread with a similar texture is challah. Having said this, you of course can also make this recipe with any bread you have at hand, from regular white bread to a fancy croissant.

How is french toast traditionally made?

The first written evidence of a (kind of) french toast recipe dates back to the roman empire. In a recipe book, the author details how to take advantage of old bread. They would cut off the edges, cut the bread into large cubes and soak them in milk and eggs. Then, they would pan-fry them in butter and then mix them with honey. It’s the same principle, really! I really like the idea of making bite-sized brioche french toast, I will have to try that in the near future.

For a basic french toast recipe, the ingredients you need are bread, milk and eggs. Of course, nowadays we like to spice things up a little so I also add brown sugar, vanilla, cinnamon and a bit of salt to my recipe. The brown sugar helps with the golden colour on the outside when pan-frying them. My mom used to make the best french toast recipe for me when I was little. If it smelled like french toast, it meant it was an extra special day. When it was my turn to make them, of course, I asked for her recipe.

How do you make French toast step by step?

For these brioche french toast, you first want to mix all the ingredients for the soaking liquid. I like to use a deep dish where I can then dip the bread in. When it’s well mixed, preheat your pan to medium heat. Add a bit of butter and quickly dip your brioche slices on both sides. You don’t want to leave them soaking in the liquid or they will disintegrate. From there, they go straight into the pan with butter, a couple of minutes per side. Remove them and they’re ready to serve with maple syrup and fresh fruit.

What is the trick to making good French toast?

How to keep them warm

There’s a classic problem faced by brioche french toast makers. The problem is that if you’re cooking for several people, the first toast you make will be cold by the time you finish. The trick to keep them warm is to preheat your oven to 50-80C/120-180F. Pop them in there on a baking pan as you cook them. That way everyone can eat them at the same time. This dish ALWAYS makes me think of my mom. She would make these on a special day and also when friends stayed over. Once, 7 friends stayed over and she made french toast for ALL OF US :O! Way to go, mom! 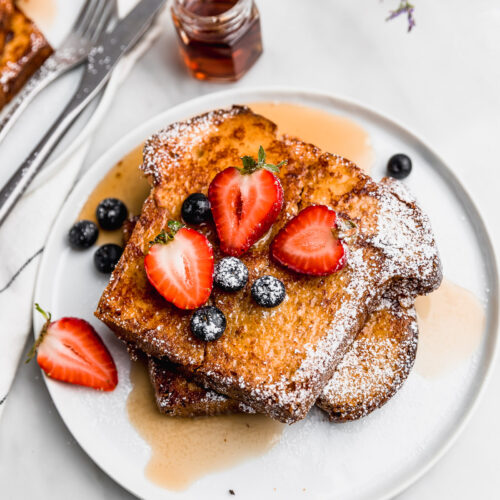 For the brioche french toast

Homemade tortillas are really simple and fun to ma