Peruvian causa de pollo is my favourite. It’s made quite easily and it feeds lots of people. The base mainly has Peruvian yellow potato and ají amarillo (yellow chilli) paste. It’s filled with shredded chicken and mayo as well as avocado. In this post, I’ll take you through how to make Peruvian causa so that it’s perfect. I will also provide guidance on Peruvian ingredients and how to work around not having access to them.

What is Peruvian Causa?

A Peruvian Causa or Causa limeña (from Lima) is a Peruvian dish made of layers of mashed potato and filled with chicken, tuna or other more modern alternatives. The ingredients for Peruvian causa are mainly Peruvian yellow potatoes and ají amarillo paste (Peruvian yellow chilli). It’s the yellow chillies that bring a delicious and complex flavour to the dish, yet it’s not spicy. For the mashed potatoes we also add a bit of oil, lime juice, salt and pepper. The filling to the Peruvian Causa de Pollo is shredded chicken and mayonnaise that lays on a layer of sliced avocado. In other recipes, you could see that they also layer hard-boiled eggs and sliced tomatoes. Every household does it differently and I think there’s beauty in that!

What’s the origin of the Causa?

According to the historian Rodolfo Tafur, the word “causa” comes from the quechua word kausay/kawsay. This word means “life” in quechua. The dish called kausay consisted of sliced boiled potatoes with sliced ají amarillo, both typical Andean crops. After that, the story becomes blurry because there are different versions of how that became the Peruvian Causa we know today or at least a closer version of it.

Some versions say that it was in colonial times that the Spanish conquistadors took the idea and modified it. Others think that it was actually a woman in Lima who invented this version. It’s said it happened when she was faced with the challenge of feeding a battalion celebrating Peru’s independence. Finally, another version claims that Peruvian Causa came to be during the War of the Pacific. During that time supplies were scarce and so the story goes that because of it, cheap ingredients like potatoes and chillies were used to feed the soldiers. In this last version, it’s said that the dish is called “Causa” (“cause” in Spanish) because it was in favour of the cause of winning the war. No matter the version you prefer, the reality is that this Peruvian Causa is one of Peru’s most important dishes to this day.

How to make Peruvian Causa

Peruvian Causa is first made by cooking Peruvian yellow potato in water and then puréeing it using a potato ricer. If you don’t have access to this delicious potato because you live outside of Peru, you can use Yukon Gold or Russet. Outside of Peru, you can sometimes find fresh Peruvian yellow potatoes or sometimes they’re sold peeled and frozen. Look for Peruvian or Latinx stores in your area. If you end up using Russet potatoes, it’s best that you cook those in the oven like we do in my mashed potatoes recipe. This achieves a drier texture, similar to the yellow potatoes. To this mash potatoes we then add the ají amarillo paste, oil, lime juice, salt and pepper.

For the assembly, you have two options. The first is to make individual portions using a ring or ramekin like I did on the Youtube video for this Peruvian Causa de Pollo recipe. The second option and the one typically used in Peruvian households is to make a rectangular or square pan of Causa. To serve you just slice pieces, just like a lasagna. To assemble the dish you’ll lay the first half of the potato, then the sliced avocado followed by the chicken and the rest of the potato to finish. Don’t forget to season your avocados. If you’ll be turning it over onto a plate, it helps to line the pan first with baking paper or cling film. I used a rectangular pan that measures 22x11cm/8x4in for mine.

Ají amarillo outside of Peru

One of the main ingredients in Peruvian causa is ají amarillo or yellow chilli. You can find ají amarillo in 4 versions: fresh, frozen, in a paste and powder. Here I use fresh which results in an almost non-existent spicy level but the flavour is always off the charts with this chilli. I cut it in half lengthwise, remove the seeds and veins and boil it. Boiling it removes more of the spiciness and also allows me to peel it. Then I blend it and the ají amarillo paste is ready to use in the Peruvian Causa de Pollo. If you find frozen whole ají amarillo, you can do the same thing but it tends to have a spicier result. I assume that when it thaws, the spicy from the seeds and veins permeate the chilli’s flesh, but I don’t have scientific proof, lol.

If you buy ready-made ají amarillo paste or even powder, it’s very likely it will be (very) spicy. This is because they tend to blend the whole chilli to make it, seeds included. Lately, I’ve noticed that in Perú brands have started to produce non-spicy pastes but I haven’t seen them outside of Peru yet. In this case, add a bit of store-bought paste at a time to the potatoes and taste how it’s doing depending on your spiciness tolerance. It won’t taste the same with less paste, but when we are outside of Peru and miss Peruvian Causa, it’s better than nothing. Powdered ají amarillo is a bit different in flavour, more similar to ají mirasol and also spicy. But again, if it’s what you can get your hands on, you can use it.

Peruvian Causa de Pollo (filled with chicken) is definitely my favourite. I have nothing against tuna Causa, but I’m generally not so compatible with the raw onion that’s typically mixed into that filling. This Causa de Pollo is what we would eat at home in Lima, maybe that’s also why I have extra love for it. Nothing compares to that filling of chicken and avocado. I could eat an infinite amount of portions. The other advantageous thing is that because it’s a cold dish, it’s perfect for hot months. Now that you know how to make causa, you’ll be able to make it at home, too.

What do you serve causa with?

I get this question every once in a while. People ask me if you serve causa and then something else on the side. I would say that causa is a standalone dish and does not need a side. Think of how Peruvian causa is made and the ingredients of causa. In the same dish, you already have potato, avocado and chicken. To garnish, I always use quail eggs which are cute and delicious. I also add a few leaves for colour. Some people also add tomatoes, hard-boiled eggs and olives. It will depend on what you like, but it’s undeniable that a gorgeous causa never fails to impress. 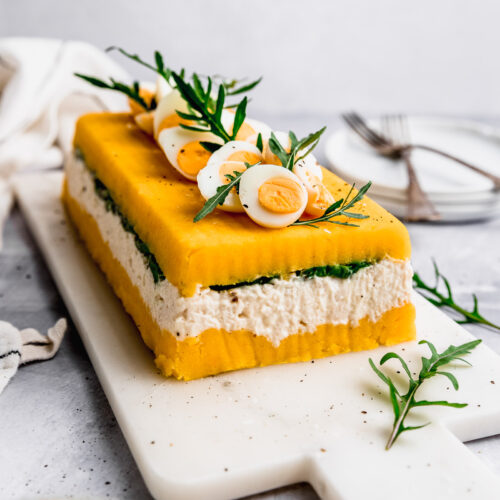 For the yellow chilli paste*

*You can replace this with the store-bought version (usually easily found online) and the difference is that store-bought is spicy but the homemade version is not.
Tried this recipe?Mention @CravingsJournal or tag #RecipeCJ!

Homemade tortillas are really simple and fun to ma