I don’t know why I haven’t given enough attention to Tiramisu on the blog. It’s a dessert that I love and have learned to love more and more throughout the years. The layers of soft mascarpone in this Tiramisu go so well with that coffee-soaked cookies and even better with the cocoa powder on top. It’s a dessert you’ll want to make over and over again for sure.

I already had a Tiramisu recipe here on the blog but with time I’ve adapted it more and more. I just HAD to share this updated version with you. It’s creamier than the previous version because that one didn’t have cream but the reality is that it does add a bit of extra smoothness. The rest of the procedure is pretty similar in case you were already familiar with it. Also, at some point in my life, I’ve made a berry Tiramisu that I would love to revisit. Are you interested in that version? Let me know in the comments below.

The official Tiramisu is made with mascarpone cheese, which is an extremely creamy Italian cheese. I know it’s not easy to get mascarpone cheese in certain places, so if you can’t get a hold of it, you can replace it with cream cheese. It’s not an ideal replacement because mascarpone cheese is made with cream and cream cheese is made with milk! That means that mascarpone feels much smoother and creamier mouthfeel. But like I say, you can definitely replace it if you don’t have a choice ;). Another factor to mention is coffee. Here I’m using instant coffee but if you prefer you can use espresso from a Mocka type coffee machine. Also, if you like a bit of liqueur in your Tiramisu, you can mix a bit of Kahlua, Grand Marnier, rum or brandy with the coffee.

The original version of Tiramisú contains egg yolks cooked in a bain-marie and egg whites whipped up raw. With time, you know that tastes and recipes evolve and that’s not wrong! I think both versions are as valid. In my case, I like to cook the egg, or you could use pasteurized egg for the traditional recipe. In my recipe, I use the technique of “pâté a bombe” which is like a meringue with egg yolks. The hot syrup cooks the egg yolks as you bet them, so the result is an airy and beautiful mix. The air in the pâté a bombe replaces the air that is in the egg whites in the original recipe and they also help us thicken the tiramisu in the fridge. It’s the same technique I use in my chocolate mousse and lucuma mousse. 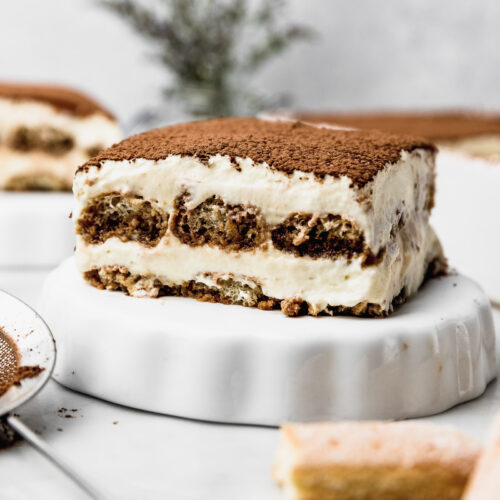 For the Tiramisu mix

For the tiramisu mix

Quick Pasta with Bacon and Spinach