Lucuma mousse is one of my favourites. The lucuma fruit is already creamy on its own. This lucuma mousse with brownies and chocolate sauce is fantastic. Lucuma and chocolate is really the perfect pairing in a dessert.

If you don’t know what lucuma is, it’s a spectacular fruit that grows mostly in Perú but also in Ecuador, Chile and Colombia. It’s orange inside and soooo creamy when it’s ripe. Its flavour is really particular and hard to describe but I think it’s between a sweet pumpkin, chestnuts and maple syrup. In Perú you can easily find it in markets or even supermarkets as well. Here in Santiago, I got it as frozen pulp and it works perfectly. In other countries, you can find it frozen as well or also as lucuma powder. To use the powder what you need to do is hydrate it first following the instructions on the packaging. Then you treat that hydrated powder as the pulp.

In general, I don’t like to use gelatin if I can help it. I don’t like the texture it creates. To thicken this lucuma mousse I used a technique called pâté à bombe where you beat egg yolks and cook them with syrup. The result is a really foamy mix that finishes to thicken up in the fridge for the perfect mousse texture. This is the same technique that I use for my chocolate mousse.

At a certain point in time, there was a BOOM of lucuma and chocolate desserts in Lima. Every restaurant had a lucuma + chocolate combo in a dessert on the menu. I ate so much lucuma at that point that I was actually sick of it for a while, lol. Now that time has passed, though, and I love it once again. This dessert is inspired by one that was sold in a store called “Casa Gourmet” in Lima that had this lucuma mousse with brownies and chocolate sauce. It was called “lucuma earthquake” there. It was delicious but SO EXPENSIVE! Lol. So this is my version :).

For the brownies, I used my dark chocolate brownies but only half a recipe. You could do the same thing using my fudgy gooey brownie recipe that uses cocoa powder instead. The flavour is almost the same but the dark chocolate ones get this lovely papery texture on top. The cocoa powder ones also have a crust on top, but not like this one. 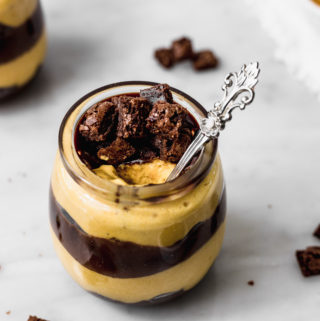 For the chocolate sauce

For the chocolate sauce

For the lucuma mousse

Have you ever made Lucuma Ice cream? I have Lucuma powder & also frozen Lucuma pulp. I live in the US but was born in Lima and miss my FAVORITE Ice cream!?