I want to show you how to make gnocchi because it’s a really basic recipe that turns out great and so much better than store-bought ones. Home-made or artisanal gnocchi are really soft like a cloud of potato and are SO good with any kind of sauce. Use them as a main dish or as a side dish.

For these gnocchi, I used regular white potatoes you would use for mash. If you want to use a different type of potato or go for a vegetable, the recipe varies a bit. Some of the dried ones will need an extra egg and others will need a lot more flour. If you go for beets, squash or sweet potato, they will probably ask for more flour. Let me know in the comments below if you would like me to develop a recipe with any of those.

It’s important that the potatoes are roasted instead of boiled. This is because in the oven they let go of moisture, which means you’ll have to add less flour afterwards. Less flour = less gummy. If you boil the potatoes, though, they will absorb water and thus ask for more flour later. Now, if you don’t own an oven, boil away!

To cook the gnocchi once they’re ready, boil water with salt, just like with pasta. You dunk them in once the water is boiling. Don’t add all of them at once but only enough to fill up the base of the pot. Every once in a while give them a gentle stir to make sure they’re not sticking to the bottom of the pan. They will float to the surface when they’re done, so remove them as they appear on the top of the water. Ideally, they will go from the water to the sauce that should be ready in a pan. However, if that’s not the case, mix them with olive oil or butter so they don’t stick after cooking.

To shape the gnocchi you can use a fork or a gnocchi board. You can see the gnocchi move in this small video above but how you make them is you make a long snail shape with a bit of the dough. From that snake, you cut small pillows. Don’t make them too big because they expand in the water. Shape those pillows into balls and that’s where “the gnocchi move” comes in. You press down the ball onto the fork or gnocchi board, lift one side up and roll it onto itself. This leaves you with the line texture on one side and that little crevice on the other side that traps the sauce oh so well!

How to freeze gnocchi

Freezing gnocchi works really great. Once you shape all your gnocchi, place baking paper at the base of a dish that fits in your freezer. Dust the paper with flour and place the gnocchi on top without touching each other #SocialDistancing. On top of this first layer, you can add more paper, flour and gnocchi and repeat until they’re all in there. After 8 hours in the freezer, you can place them all inside a container and they won’t stick to each other in the freezer anymore. To cook them, you just drop them into the boiling salted water and remove them once they float.

Since they’re so great to freeze, I always advise that you make a double recipe and freeze half of it so you have some at hand for a rainy day.

Gnocchi are so much better with the right sauce! Here are a few of my favs: 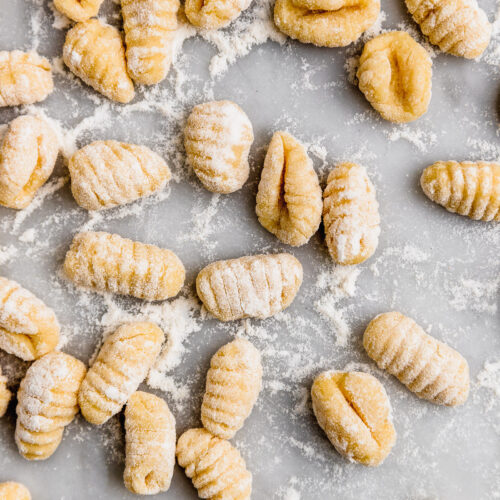