Leeks and mushrooms are SO lovely together. A savoury galette is a lighter, eggless, thinner and easier version of a quiche. It’s quick to make and delicious to eat! This leek a mushroom galette will be a favourite of yours in the future, I assure you! It can be served as a starter or as the main event with a fresh salad on the side.

I love everything about this galette. The dough is the same one I use for my caramelized onion quiche but this time I added chopped fresh rosemary to it. It becomes incredibly fragrant and adds personality to the already flavoursome galette. The advantage with this recipe is that you don’t have a mould involved so it’s just easier to assemble and cook.

Whether you’re making a quiche or this savoury galette, it’s always best to cook your veggies before assembling. If you don’t they will release too much water and dampen the dough. Also, mushrooms and leeks love to be cooked in a pan to get the best from them. Below the leeks and mushrooms, there’s a layer of ricotta. If you’re going to buy it at the store, try to find a dry one that you can easily crumble for the base. If it’s too wet it could also dampen the base of the galette. You can also EASILY make it at home using my homemade ricotta recipe. Actually, the ricotta in the video and photos was made by me.

To sauté the mushrooms remember that you need to use high heat and also avoid overcrowding the pan. If you place too many mushrooms on the pan, they will start to release a lot of water and boil away instead of becoming golden. Add only enough to cover the base of the pan and then leave them still for a few minutes so they can caramelize. Then, flip them and leave them still for another couple minutes. You’ll see that the difference in colour and flavour is astounding.

You can make this dough for this mushroom galette by hand as I show in the video (I love using my hands for this one! It’s so satisfying) or you could use a food processor instead. If you use a food processor make sure to first process the dry ingredients with the butter and then add the liquids to form the dough. This will make it look flaky just like the one in the video. Also, this dough is perfect for freezing and you can do so for up to a month. Therefore, it’s a good idea to make double the recipe of dough and freeze one of them for a rainy day. 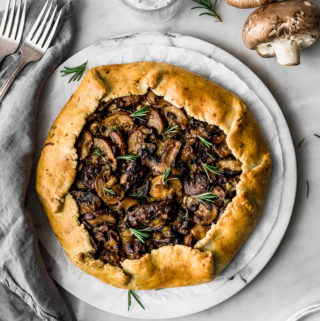