One of my favourite recipes on the blog is my banana bread. I love its texture and flavour. Also many of you are in love with it as well so I decided to go bananas (get it?) and make another version of it. Chocolate and bananas are a match made in heaven so we add double chocolate to this marbled chocolate banana bread: cocoa for the marbling as well as chocolate chunks because duh.

Every time I talk to someone about banana breads I get the same comments. Sometimes you get more of a bread pudding texture and others more like a loaf. For this recipe it’s basic that you weigh the banana pulp before making it. If I was to give you an amount of bananas instead the results would be really inconsistent. Whoever gets a larger banana would get a bread pudding texture and someone who gets smaller bananas would have more of a regular loaf.

I have to say that I’m usually a strong person and give away most of the sweets that I make. But damn, I wasn’t able to do that with this marbled chocolate banana bread lol. I must have given away about a third ¿? of it and the rest I just ate slowly because I just couldn’t resist.

It’s great to find those chococolate chunks in this marbled chocolate banana bread so make sure you use a nice chocolate bar. Don’t make it milk chocolate because it would be too sweet. Go for something that has between 60 and 70% cacao depending on what you like. 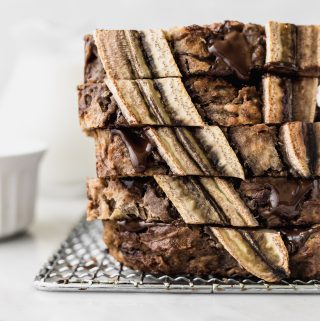 For the banana bread dough

For the chocolate half

For the chocolate chunks

For the banana bread dough

For the marbled half

For the chocolate chunks

How to make sourdough starter