Aubergine chips are a great option to have in an appetizer table because they have a really low carb content (unlike potato chips) and they’re also not fried but baked. These are also sprinkled with paprika and cayenne pepper which give them a smoky and spicy flavour that contrasts really nicely with the honey.

A few months ago I went to a restaurant in Lima called “Jerónimo” where they serve slightly spicy aubergine chips with a sweet syrup as a courtesy when you arrive to your table. I loved them and I was aching to try making them at home. When I started to investigate it turned out that they’re a really popular dish in the Andalucía region in Spain where they are fried and served with molasses.

Of course you don’t have to make them spicy if you don’t like it and you can vary the spices that go one them before baking as much as you like. I personally love the contrast between the spicy and the sweet from the honey. 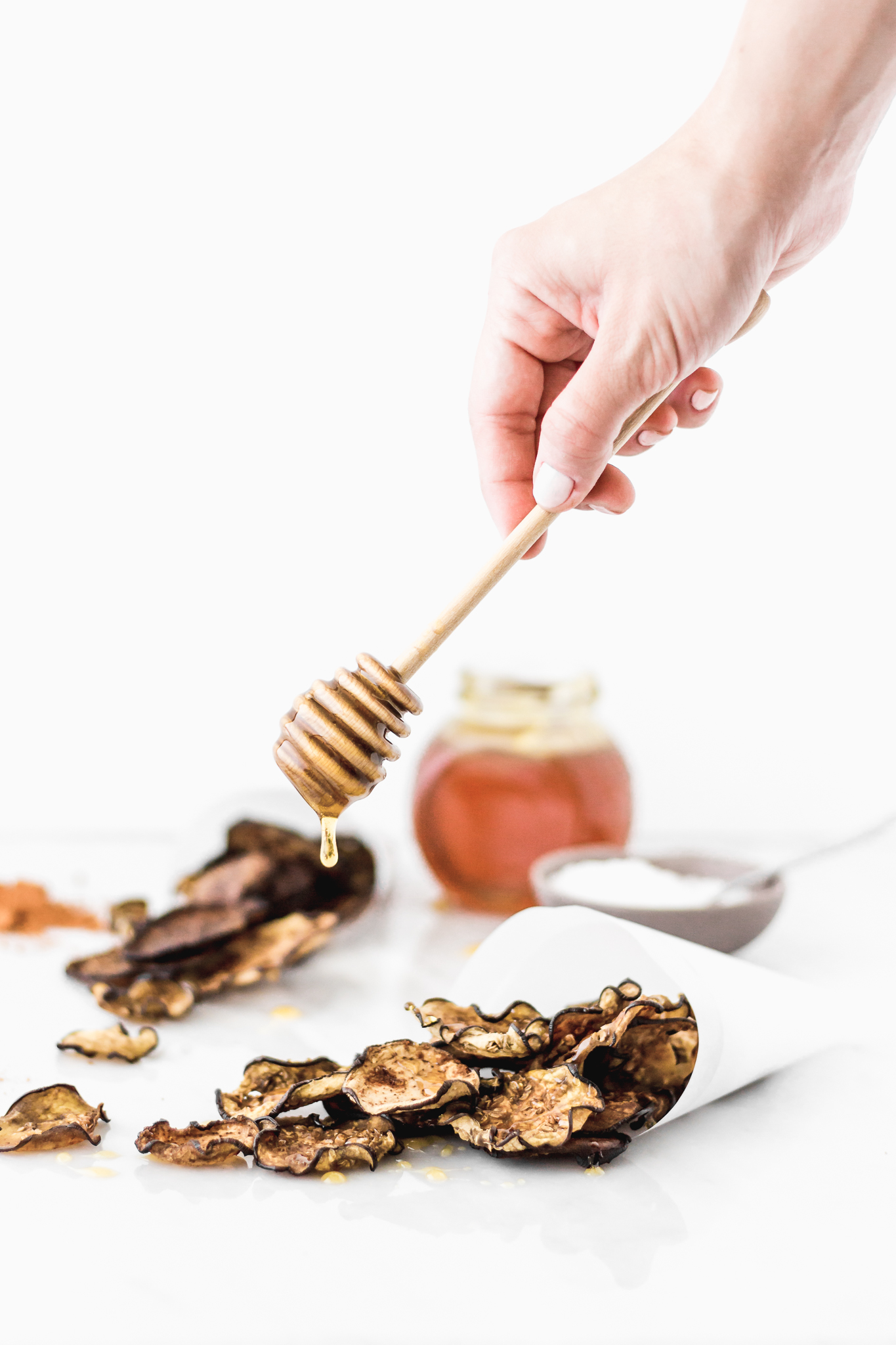 They turned out really crispy in the oven and to achieve that the most important thing is to make thin and even slices. If you have a mandoline it’s going to be much easier but even in the video I show you that it’s possible to do it with a knife. 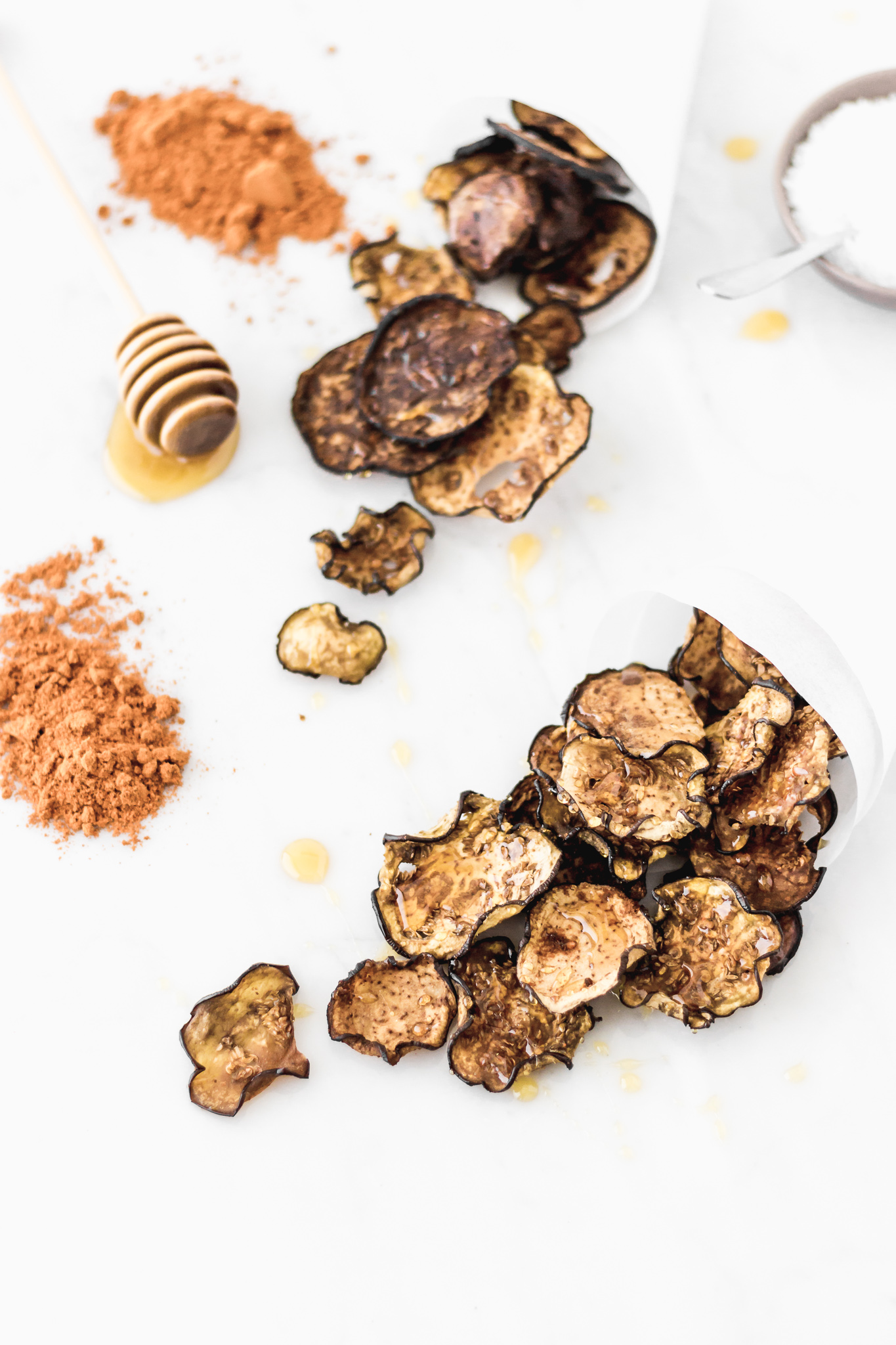 It’s really important that when you choose your aubergine for this recipe you choose one that is hard to the touch so that you can cut it easily. When they’re soft the center becomes spongy and it makes it really tough to cut even slices. 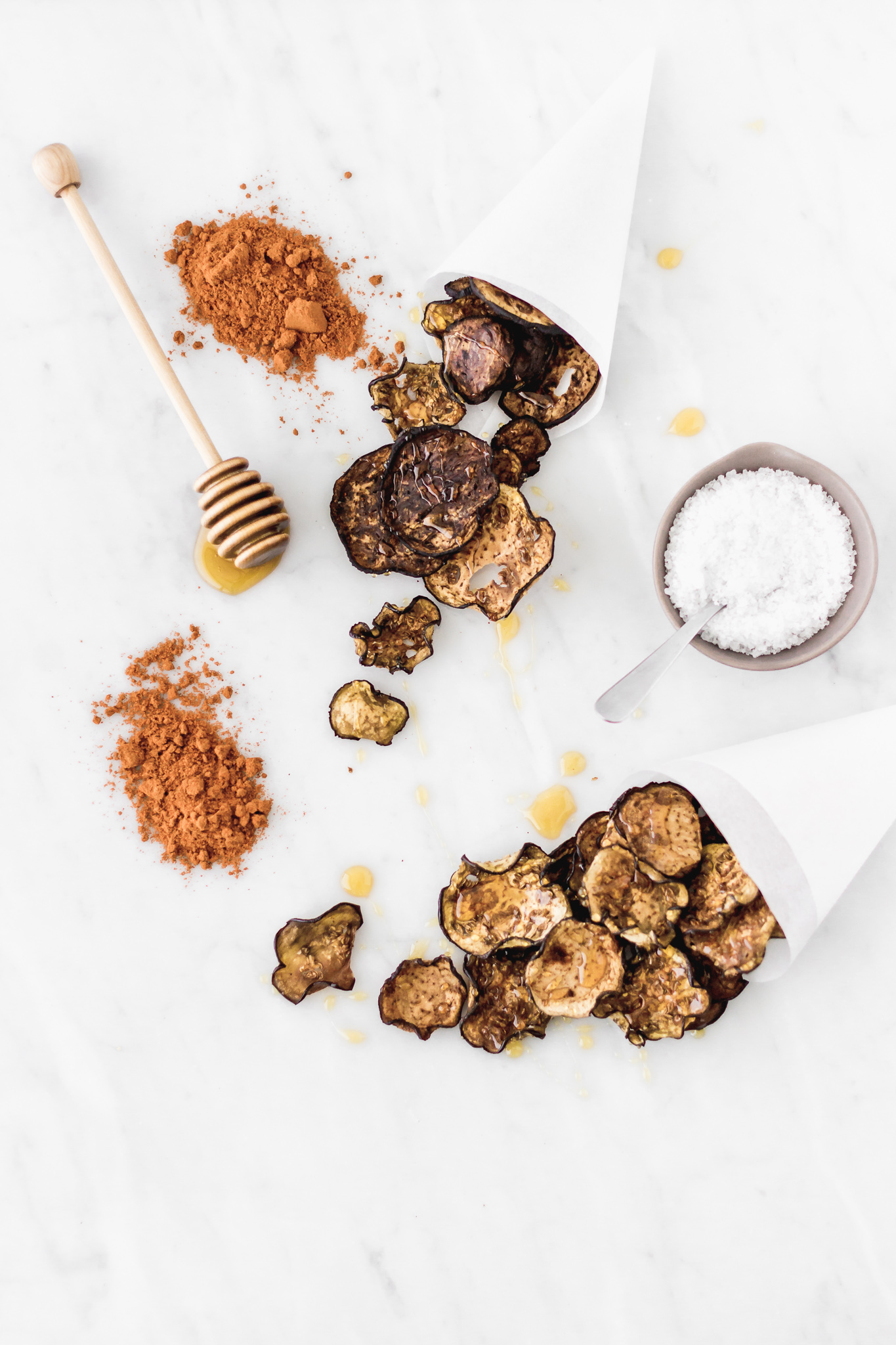 If there’s something important when we use aubergines in any preparation is that we degorge them once they are chopped. This process is done by heavily salting the chopped aubergine and letting them rest for at least 10min to then rinse them. The salt makes them release water and along with it the bitterness that is usually present in these vegetables. 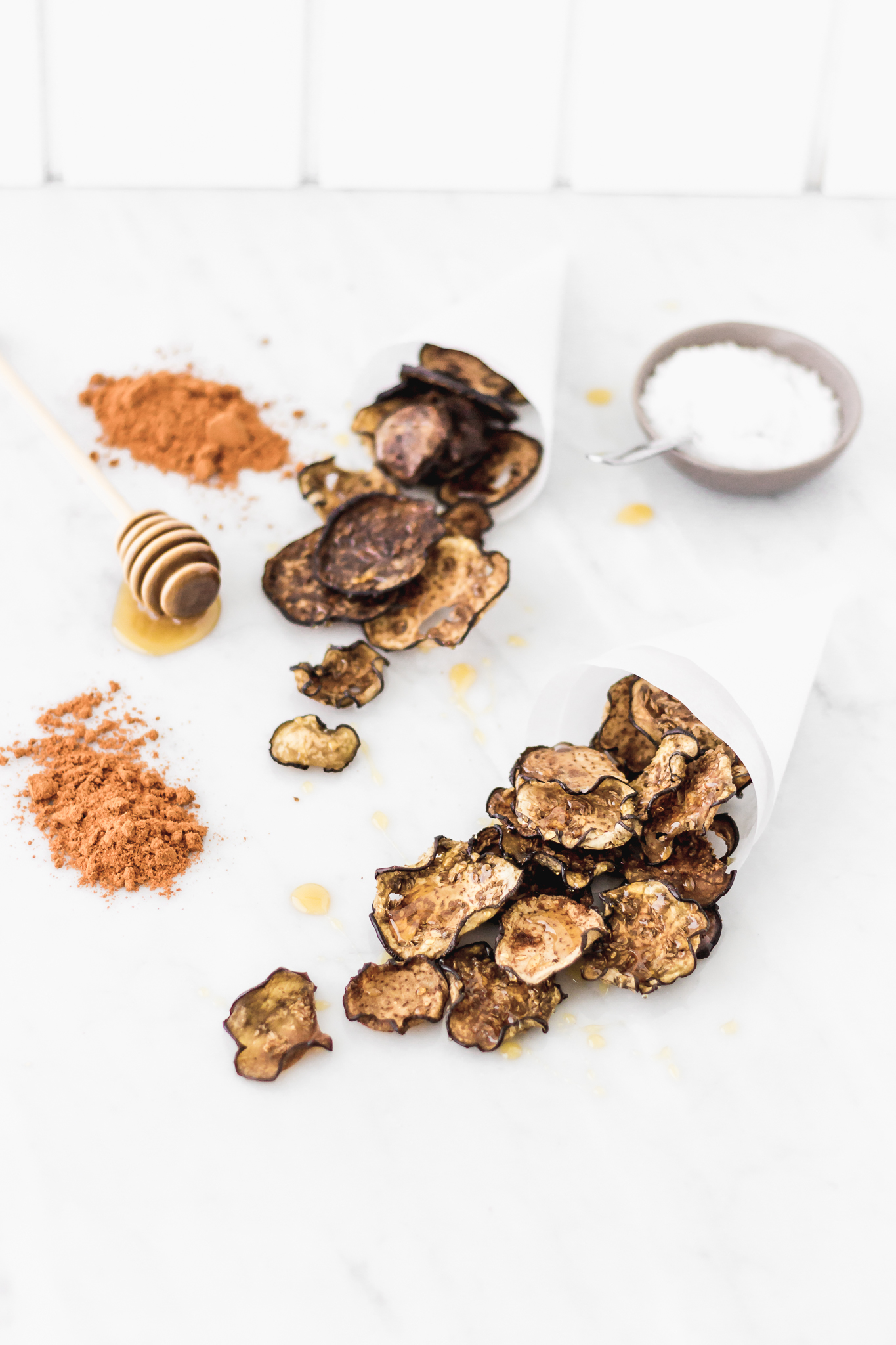 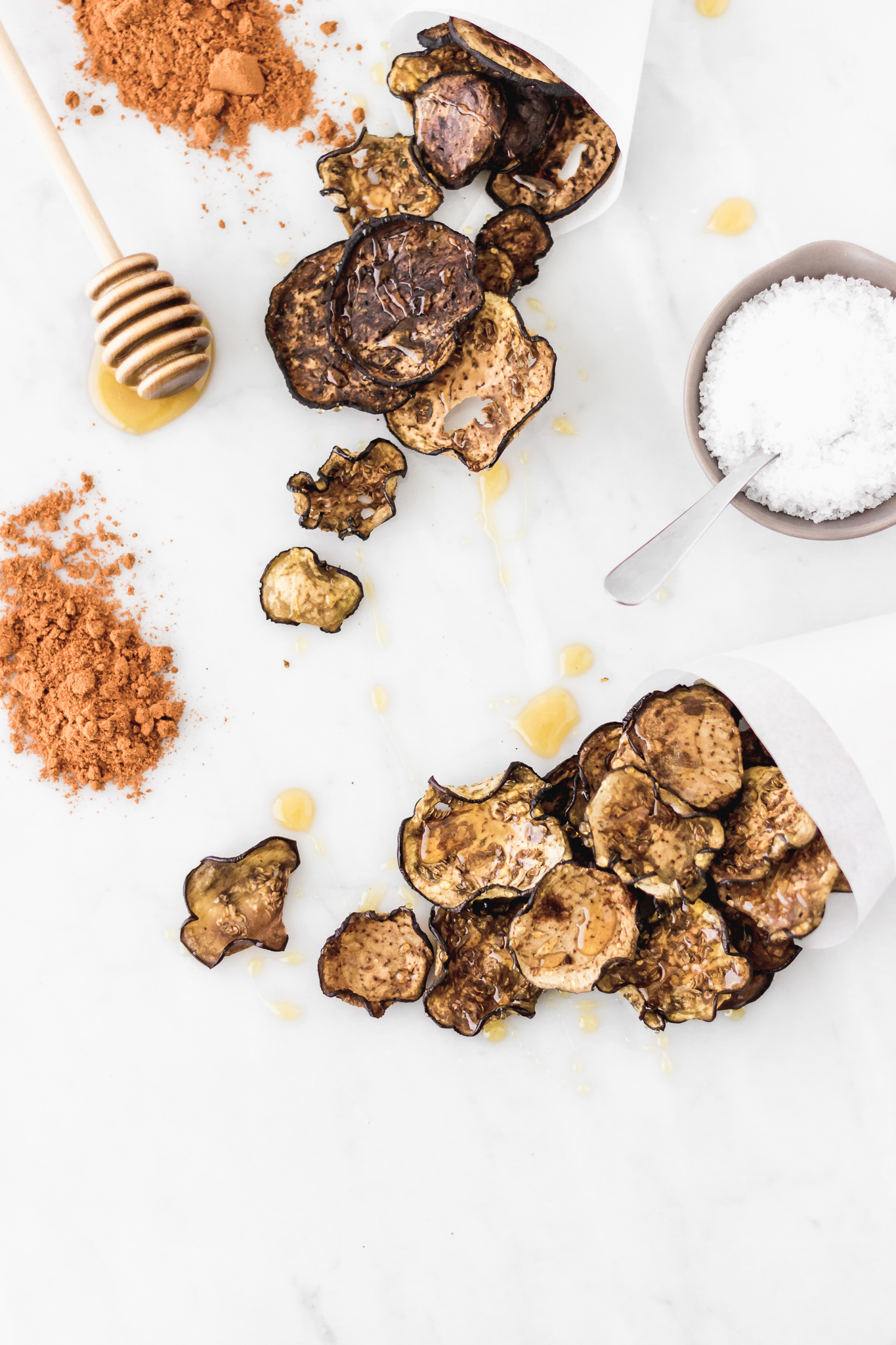