A couple of years back I uploaded my Zebra Bundt Cake and you loved it. Now here’s the version in a rectangular pan, but also, I had to make it in another flavour or it would be more of the same. This red velvet marbled cake is delicious, with a cream cheese glaze that is just amazing with red velvet.

I love the zebra marbling, doesn’t it look lovely? It takes a bit more work because you have to place the batter in piping bags. Then you fill the pan up in lines, but I really think that the bit of extra work is more than worth it. I also love the flavour, because this red velvet marbled cake tastes freaking delicious. Old-fashioned red velvet used to be made with beets. The modern version has red food colouring, cacao powder and also a bit of vinegar. I know the vinegar sounds strange, but it’s what gives it a velvety mouthfeel.

If you’re a fan of red velvet like me, here are a few recipes that I’ll think you’ll like. Also, let me know if you would like to see more recipes from me with this flavour.

This red velvet marbled cake can also be made in a bundt pan for a larger version. In that case, you want to multiply the ingredients times 1.5 and the eggs go from being 2 to 3. Follow the instructions of my zebra bundt cake for this zebra marbling effect in a bundt pan. If you want to make it in a round pan, then you only add batter at one point at the centre of the pan. First vanilla, then red velvet, and so on at the same point at the centre. 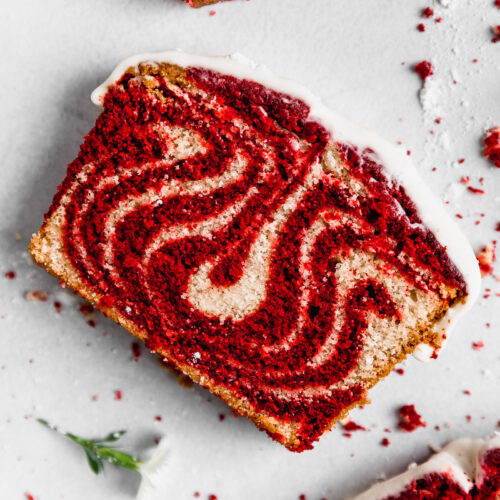 For the red velvet marbling

For the glaze (optional)