I have an undying love for cheesecake… those creamy, not-at-all-dry creations and definitely gelatin-free as well. This Blondie Cheesecake is so scrumptious: it has a blondie base, brown butter cheesecake filling and extra blondies and caramel sauce on top. Not adviced for dieting ;).

Can you believe such an amazing cheesecake even exists? If you’re a fan of caramel-y flavours, then blondies are your jam. They’re chocolate-less brownies and they always have brown sugar which makes them extra caramel-y and chewy. If you like blondies, feel free to check out all my blondie recipes. Thee filling is the same as my vanilla cheesecake recipe with the exception that I use brown sugar instead of white granulated, which adds (again) that caramel flavour from the blondies. Finally, I finished it off with salted caramel sauce that really binds everything together.

This cheesecake, like all large cheesecakes, needs a bain-marie in the cooking process (minis and bars don’t actually need it). It’s been a while now since I started not putting the cheesecake actually into the water of the bain-marie. Rather, I place the water tray on a level below in the oven and the cheesecake above it. It works as good and the result is incredibly creamy and cooked to perfection.

The 28th of December was my birthday and this was my birthday cake. Cheesecake is my favourite cake always, and given that 2020 was such a weirdo of a year, I really wanted to go all-in on my cake. If you like cheesecake as much as me, check out these other cheesecake recipes on the blog: 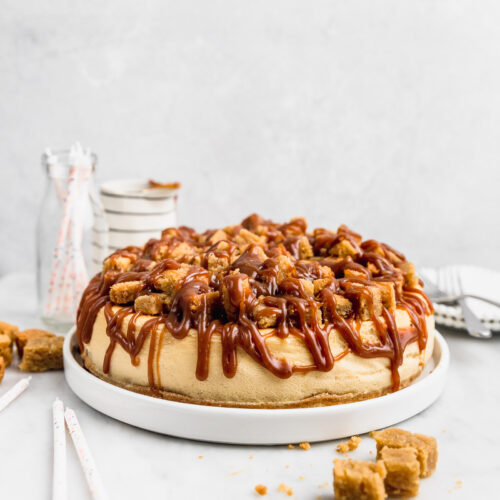 For the blondie base

For the blondies on top

For the salted caramel sauce

For the blondie base

For the blondies on top

For the salted caramel