OK so let’s say you’re making yourself a coffee. It smells great, tastes great, but it needs a companion. This blueberry coffee cake is just perfect for that situation. It’s airy yet rich, with that fantastic cinnamon streusel and blueberry explosions. Also, coffee cakes without blueberries should be illegal.

I know that it’s called “coffee” cake but honestly, half of it was eaten coffee-less. I will say that it’s so much nicer warm, tho! I heated it up for 15 seconds in the microwave before eating it and WOW, what a difference. It only lasted 2 days in my house and it was because it was just so delicious. The crumb is perfect as well as the streusel. And don’t get me started on those blueberries!

So many people had asked me before to make a coffee cake and I didn’t listen. Now that I tasted my recipe I have to say I should have done it a long time ago! You can make it with or without the blueberries but honestly, try your hardest to make it with the blueberries. It’s delicious without them but the fact that they’re there is just too good. I don’t ever want to be in the position when I don’t have blueberries in my coffee cake ever again, lol.

My obsession with cinnamon is endless. I have now made 3 types of cinnamon rolls, a cinnamon roll bread, a cinnamon apple galette, cinnamon raisin bagels, cinnamon sugar blondies, cinnamon sugar pretzels… I could go on. In summary, I love cinnamon. The cinnamon streusel in this blueberry coffee cake is to obsess over. In case you didn’t know you can freeze streusel! So feel free to make double the recipe and freeze what you don’t use so that you can use for other muffins and cakes. 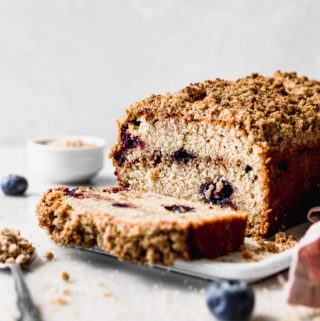 For the cinnamon streusel

For the cinnamon streusel