Here’s your new obsession: these triple chocolate brownies. They are perfect for when you really deserve a treat. For me that’s all the time so it’s an all the time sort of brownie… and a special moment brownie, too! LOL.

The majority of you have a close relationship to with my fudgy gooey brownies. They’re made with cocoa powder, which is really easy to get and also cheap! I love that recipe because the result is spectacular and that’s not always the case for cocoa powder brownies. This recipe doesn’t use that one as a base but rather my dark chocolate brownies. This recipe uses dark chocolate for the batter, I like it with 60-70% cacao chocolate. I would say that the flavour is as good with cocoa powder (especially if you’re using a nice one). The nice thing about using dark chocolate though is that it creates that papery look on the top of the brownie which looks GLORIOUS.

The brownies in this recipe have TRIPLE CHOCOLATE. I added some white chocolate, milk chocolate and dark chocolate to the batter. No, when I want to buy dark chocolate, I usually buy a nice quality couverture. However, many times I don’t have the time to get it and instead I just go to the supermarket and pick delicious chocolate bars for the recipe. It’s likely that you’re going to have to buy two bars of dark chocolate though: one for the batter and another one for the triple chocolate. Or, if you prefer, you can use my cocoa powder brownie as a base and then mix in the three chocolates. 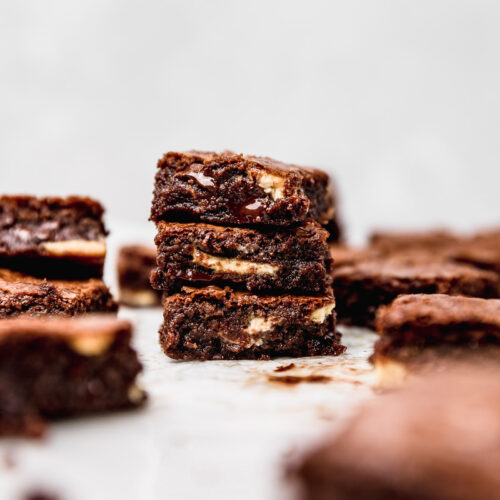 For the brownie batter

For the triple chocolate (it can also be just one type)

For the brownie batter

For the triple chocolate